But at least AFVN fared much better than the South Vietnamese Television Station next door.

Wow! Sounds like John Kerry.  They gave me a ticket home at the end of 14-months and that was good enough for me.  I did hit my head on a number of bars in Saigon.... 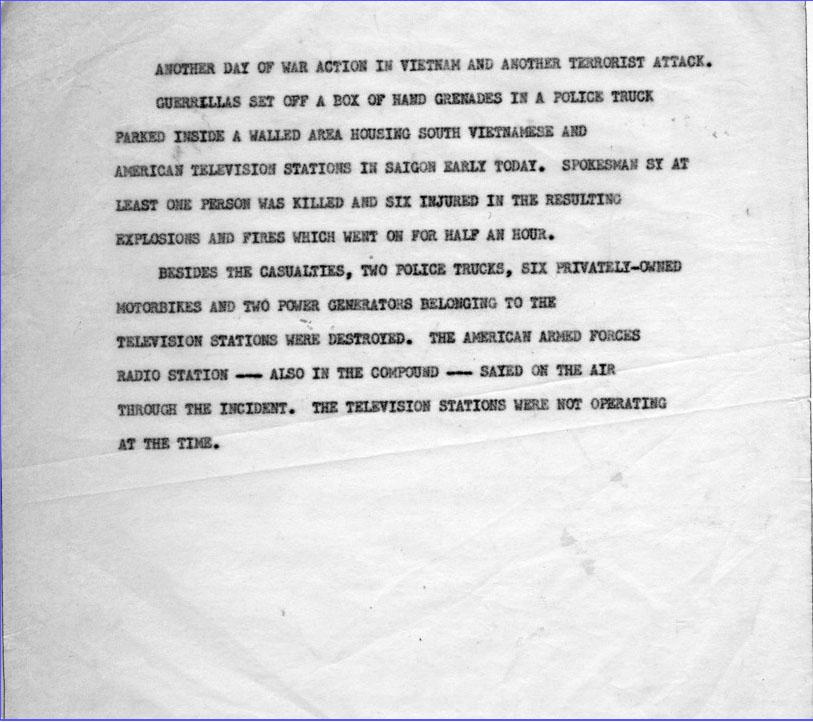 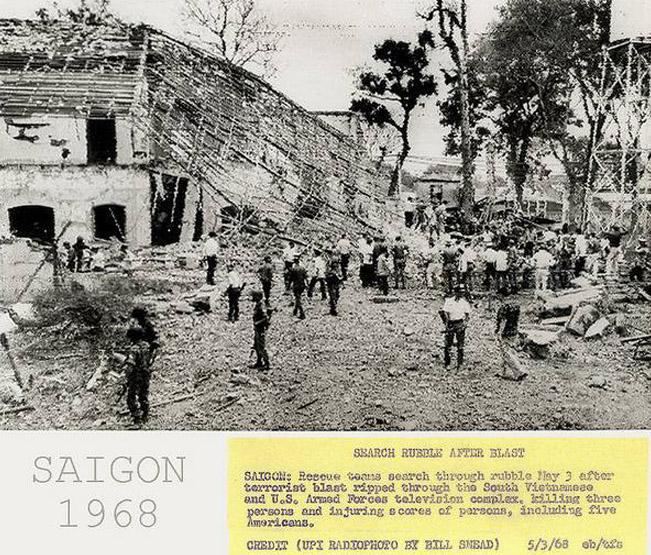 Wow!  I have never seen a story about the bomb. Here is proof there was some damage to the studio....and there was damage to my head also. I was in the TV studio working on the weather set when the bomb went off and all of the lighting grid came down with some of it on me!  I use to  be very smart but have never been the same since...

"The [above] sheet is a verbatim (UPI typos/errors included) manual typed copy of the UPI feed shortly after extensive explosions at THVN next door to AFVN.  As usual, UPI was first out with the story, but (as usual) it was error ridden.  At the first explosions CWO MacDonald stuck his head out the front door and yelled back: "oh shit".  I looked out and saw one EM run out of the compound and get into a Renault taxi.  Most people, military and civilian, went to one of the sand-bagged positions in the compound - I grabbed my M-16, .45, and helmet and went to the position out the exit door past engineering operations (opposite end from the entrance).  Tension was high, the explosions sounded a little like motor rounds being "walked in" (that analysis was from my previous USARV assignment).  After a few minutes the word came out that it was a false alarm.
"Shortly after the all clear, CWO Mac and myself went over to THVN and were shortly thereafter joined by a couple of Embassy/JUSPAO  "security" types.  I saw no press in the compound.  The security officer of THVN, Major The, informed us that it appears that two guards got into an argument over religion (one was Catholic and the other a Buddhist) and caused a grenade of some sort to go off.  From the story Major The told it seemed as if a third person was present and got away from the argument.  In any event, the rear of THVN was slightly damaged and several storage sheds, bunkers, vehicles and guard bunkers (in the rear of the main building) were demolished.  In all likelihood most of the damage was caused by hand grenades and 40mm rounds.  There was no attack nor sabotage involved.
"I don't have the date for the incident, but believe it was in the first couple weeks of April (following the invasion). I could be wrong on the date and, for that matter,  even the year of the date. I recall it was an overcast and muggy day which, of course, describes much of any year there." 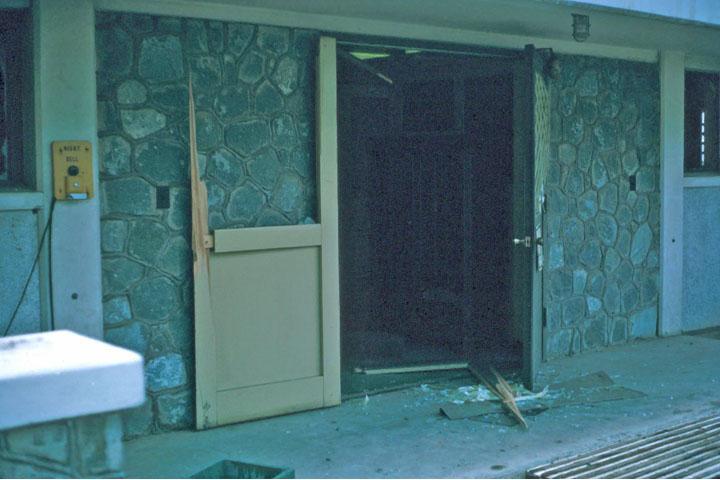 As Bob Morecook said,"We had an 'open door' policy."

This and three related photos are in Dick Ellis's slide file.  Click Here
[Photo received from Dick Ellis in September 2012.]

So now you're blaming grid lock for your bad days....?

The Glasgow Herald for May 4, 1968 reporting on the Bombing at AFVN/THVN.

[With apologies, I always thought those taxis were blue and yellow.  Jim W] 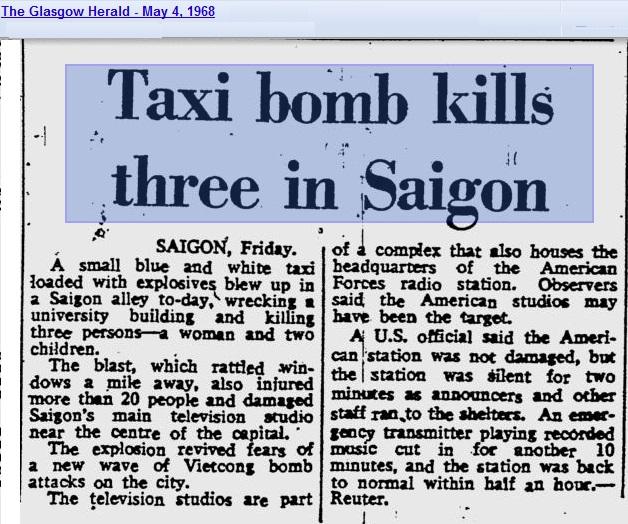 Dickie,
Do you know you were eligible for the Purple Heart?  An officer at Da Nang, who dived under a desk and hit his head during an attack, got one.
Frank