By Suzanne Ritter.  Submitted by Rick Fredricksen on October 18th, 2013.

I was at Korat from 1974-76.  We had a lengthy restricted playlist.  One of the tunes was "Eve of Destruction," by Barry McGuire. Shortly before my tour ended,  I remember being handed a huge reel of tape and being told this was a special program by Casey Casem that would be played in place of the 2 LPs that usually made up the LA shows.  Casey was doing a special on "protest songs" and sure enough, middle of the night out comes "Eve of Destruction."  I couldn't jump the needle over the record because it was reel to reel. So I was concerned all night long that I was in for it in the morning.  But come morning as I bicycled around base, I saw lots of those half-oil barrel "grills" being fed lots of documents.  We were getting ready to pull out, and "Eve of Destruction" was the signal to destroy sensitive materials. 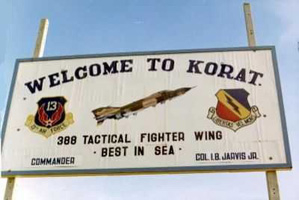