By this time, Maj. Kean had received a call from President Gerald Ford. The commander-in-chief instructed him to notify the ambassador it was time to go.  “Ambassador Martin didn’t want to go. He had lost a son in Vietnam and he wanted to stay,” Smith said. When the major told Martin it was time to leave, the ambassador looked up over his glasses and said, ‘All in good time young major. All in good time.’”
Helicopters were landing two-by-two every five minutes to rescue those lucky enough to get through the embassy gate and past Smith. For 28 hours the rescue continued at a feverish pace. Smith stood his post without relief the entire time.   Finally, the Marine perimeter guards were brought back inside the compound a few at a time.  Once they were all inside, everyone fell back to the safety of the main embassy building. The massive, 20-foot-tall teak doors were shut.  A huge beam was put in place behind the 6-inch thick doors to keep them from being forced open from the outside.  A grenade screen was set in place behind the doors.  Those inside headed for the heliport on the embassy’s roof. The Marines who had guarded the outside of the compound were flown out first in choppers to the 7th Fleet.  That left only Kean and his 45 Marine guards still waiting on the roof.  Shortly before 7 a.m., the choppers stopped arriving. The rescue had run like clockwork hour after hour until that time.
Then nothing.
“The sun was coming up,” Smith said. “Enemy tanks were rolling through the streets of Saigon. We couldn’t see them, but we could hear them rumbling along. There was massive hysteria and confusion down below.”
The civilians who hadn’t made it onto one of the outgoing helicopters earlier took a fire truck left behind in the compound and rammed it through the embassy’s front doors. They got inside and ran up the stairway leading to the heliport on top of the building.  Just before they reached their destination where Smith and his fellow Marines were waiting for a ride out, they came face-to-face with Cpl. Stephen Bauer.  He was guarding the door leading onto the roof.  The corporal was waiting for the civilians in battle dress armed with an M-16 rifle.  Bauer stopped the charging, panic-stricken crowd in its tracks and held it at bay.
“The major got on the radio with the 7th Fleet and asked them what was up?” Smith said.  “They had forgotten us.  He told them he needed three more choppers to get us out.”   “In less than an hour they arrived.   We had split up into three groups by then. There was no rhyme or reason who was in what group.”  The first helicopter landed and one group rushed aboard.  The chopper took off.  A second one landed right behind it.  Smith and a dozen or so more embassy guards climbed in quickly as it lifted off the pad and headed for the safety of the fleet.

Randy Smith is pictured at 19, shortly after he completed boot camp. He thought he was a pretty gung-ho “Jarhead.”   Cpl. Randy Smith knew the war in South Vietnam was over when he was ordered to take down the American flag at the U.S. Embassy in Saigon.  “I was on guard at the senior post, just behind the embassy’s massive teak front doors, around 4 p.m. on April 29, 1975,” he said. Maj. Jim Kean told me to ‘Wrap up what you’re doing and sign out on the logbook. Things have come to an end.’”  Two hours later the major ordered Smith and Lance Cpl. Duane Thomas, another guard to lower the flag near the embassy’s entrance for the last time.
“We walked over to the flag that was on a pole in a garden area inside the embassy and gently brought it down. We folded it properly into a triangle, saluted,and handed it to the major,” Smith recalled.  “Our commander took the flag and the logbook and gave it to Ambassador Graham Martin.”

The 19-year old embassy guard, who now lives in Venice, Fla. and for a decade taught fourth and fifth grades at East Elementary School in Punta Gorda, Fla., had a premonition after a year of duty in South Vietnam that Saigon was about to fall to the enemy.  The war was a decade-and-a-half-long effort by the United States and some of its allies to keep the southern half of Vietnam from being absorbed into the Communist block of nations. It was a failure for the United States he concluded on the roof of the embassy in Saigon 28 years ago.  “Things started really falling apart at the beginning of 1975,” Smith said. “They evacuated our embassies at Da Nang, Naha Tran, Ben Hoa and Na Trang as the South Vietnamese Army fell back in disarray. After the American soldiers pulled out, South Vietnamese officers and men turned zil and ran in the face of the enemy.   “The last month we were there, you could go up on the embassy roof at night and see artillery shells exploding all around the city. The North Vietnamese and Viet Cong soldiers were tightening their circle around Saigon.  “A few weeks before the fall, South Vietnamese civilians who worked for the Americans started showing up at the embassy. They were trying to get visas to get out of the country. They knew bad things were happening because we had closed all our other embassies and the enemy was closing in on Saigon.” he said.  “Our people were telling us things were going to be okay. We knew better. It was obvious by then.”  More and more civilians kept coming to the embassy. During the final days, thousands of distraught men, women and children surrounded the U.S. compound screaming they wanted out. They knew that once the North Vietnamese Army arrived they would be targeted for death, torture or at the very least a “reduction camp” that was little more than a World War II concentration camp. 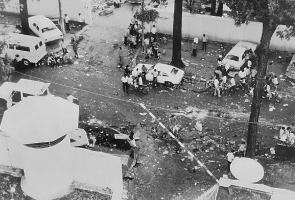 Thousands of South Vietnamese congregate outside the American Embassy in Saigon hoping to get through the gate guarded by U.S. Marines and climb aboard U.S. helicopters that would take them to safety.  Possibly as many as 10,000 civilians lined the outside embassy walls the last day or two, desperately hoping to get a visa and a flight out, according to Smith.  It got so serious that a detachment of a couple hundred Marines from the 7th Fleet, anchored offshore, were helicoptered in to protect the outside perimeter of the embassy. They were put on guard 24 hours a day, ringing the outside wall until the final hours.
Tension was building inside and outside the compound.   It had been prearranged by the ambassador and the 7th Fleet commander that playing Bing Crosby’s White Christmas on the radio was the code to start Operation Frequent Wind,  the helicopter evacuation of the embassy.   When Marines heard that song, they were to cut down the trees in the embassy parking lot so the helicopters would have more room to land.  “When the locals saw the trees coming down, mass chaos broke out,” Smith said. “Bing Crosby was belting out White Christmas in April in Vietnam as it all came to an end.”
The civilians went crazy, Smith said. They started scaling the embassy walls, knowing this was their last chance to escape. The guards tried to hold them back.   “At 3:30 a.m. on April 29, the first choppers came in,” Smith said. By then he had been detailed to man the gate the South Vietnamese civilians were allowed through on their way to the rescue helicopters.  It was his duty to count heads when they came through the gate. He would send groups of 50 to the CH-53s, the big choppers with two rotors, landing in the parking lot inside the compound. Groups of 35 civilians were dispatched to the heliport on the embassy’s roof where CH-46s, the smaller helicopters, landed every five minutes.  “At that time, it was the largest helicopter evacuation in history,” he said.  “It still might be. People wanted out. They didn’t want to wait for the next chopper.”  “Marine, Marine, I’ll give you anything to go,” some yelled. They were clawing to get free. Men had lost their wives; mothers couldn’t find their children. They were all in a panic. It was chaos. 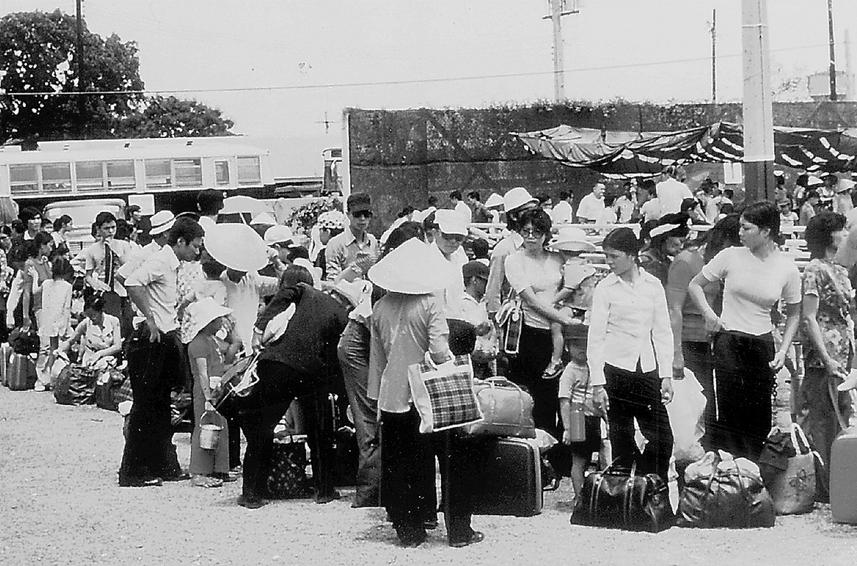 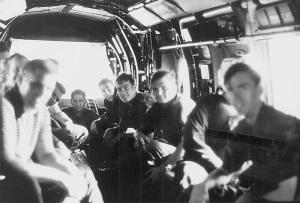 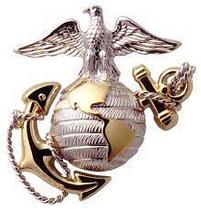 Marine, Sgt. Juan Valdez, the guard unit’s non-commissioned officer in charge, was the last American to scramble onto the last helicopter at the last second on the last day as it slowly climbed into the sky.  He slipped and nearly fell, but was grabbed by several on board who pulled him to safety.   By this time, Smith’s helicopter was well away from the embassy headed toward the fleet.  “We were taking rounds of small arms fire from the ground,” he said.  “I was exhausted.  I was really glad to get out, but I wasn’t too happy about the way we left.  It was a moment frozen in time I’ll never forget.”

This was the scene in the street outside the U.S. Embassy in Saigon as North Vietnamese tanks rolled through the city. Most South Vietnamese civilians who had any connection with the U.S. war effort had already been flown out to the 7th Fleet anchored offshore or had fled the area hoping to blend in after the enemy takeover.  I was only 19, but I became hard-hearted that night. I didn’t listen to any sob stories. I didn’t take any excuses. My job became mechanical. I did everything very precisely by the numbers,” Smith said. “I did my job as a Marine. I did what I was trained to do.”

Last U.S. Marines in Saigon at the Close of the Vietnam War

[Received from David Pinto in March 2021] 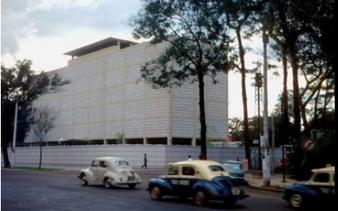 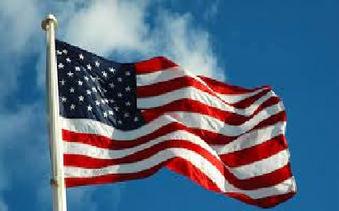 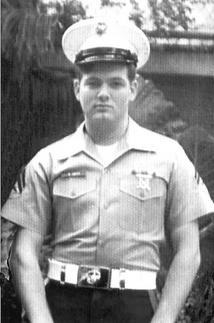 These are the last 11 Marines of the U.S. Embassy guard unit flown out of Vietnam on April 30, 1975. Maj. Jim Kean, in civilian clothes. Randy Smith’s rescue chopper flew off the top of the embassy moments before this helicopter left.
“The final bird touched down. Bauer, who had been holding the hysterical civilians at gunpoint, made a dash for it.  He left a container of tear gas in the stairwell to slow the South Vietnamese down while making his getaway.  The gas billowed out onto the landing pad and got in the chopper pilot’s eyes, almost causing him to crash on takeoff.