Appearing in Ken Burn's Documentary on the Vietnam War

Jack Mulvain  Thanks for the heads up.   I have recorded  the series and am in the process of viewing every episode.  Hope all is well with you.

Timothy O'Leary  Good on ya, Master Chief, Good on ya.​

Lupe Figueroa:  Well I will just have to watch the series, Uncle.  Documentaries were made royalties never paid.

Chris Kelley  Joe Ciokon:  Sso I served a year in Panama without you checking me out.  Did Chief Kragen (so?) replace you as the, pardon the expression, only Navy man on the CFN staff?  Whatever happened to Kupfer?  Do you know what became of Wayne Commins?

Chris Kelley:  I'm sure everyone is interested in reading your longer version of this story. So take the time and do it.

If you look at the guy on the left of this photo I think you will see our JoeC with a camera in his hand.  Joe was News NCO overnight when Tet started and was the first on the scene at the embassy at daylight.

Bobbie Carleton:  Thanks for the heads up Joe. I' recording it and am watching it now.

He is the 2nd from the left (the first person is only partially shown), holding a 16mm movie camera.

[Received from Dick Ellis, and possibly taken from a Facebook posting by Paul Blizzard, on September 29th, 2019.]

Joe Ciokon:  The original CBS version was much clearer and seemed longer.  You could see me rise from the kneeling position and start winding the camera key.  If course, I was 160lbs and a crew cut.

Chris Kelley  What about the film you shot. Who saved it?  Do you personally have the film? Do you have a still shot of your anchor work?  How long did you serve in Vietnam?  As an old reporter I have dozens of questions for you.  By the way when did you depart Panama?

Jim White:  Joe, Please write your experiences during TET 68 and send them to be so I can post them on our site.  That's what it is all about.

Bill Graves Mitt:  I have been back twice....took my son with me the first time.  Love to go again.  Even stayed at the Rex.  Hard to stomach Hanoi's flag flying from the roof. 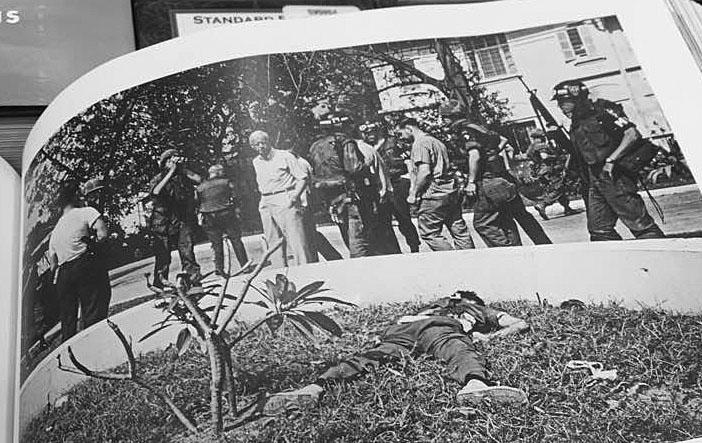 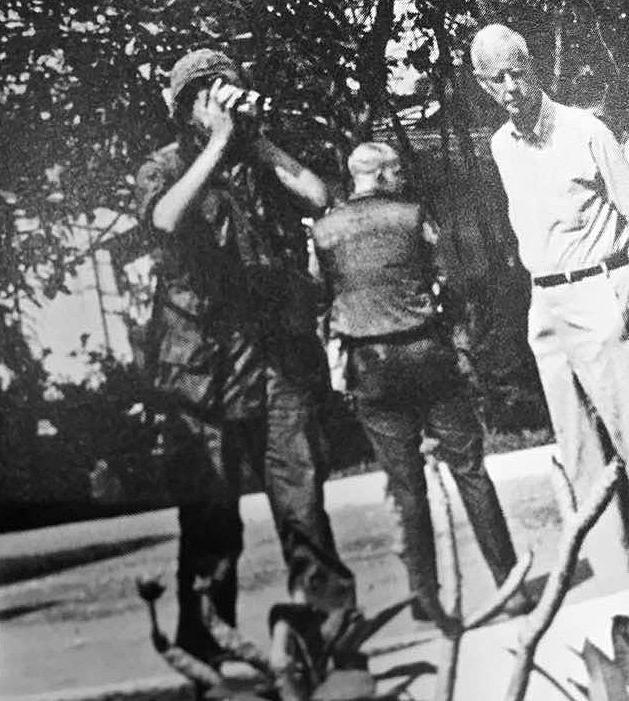 Chris Kelley: I don't have DVR but PBS is re-running episode six in about 35 minutes.  Thanks.

Gary Shrout:  I saw that last night, and noted the cameraman.  Made me  think of all the awesome military photographers I have known through the years.  I had no idea it was you.  Like Odell said, very glad you made it back.  And from those other experiences as well.

Tom Sayer:  I've recorded the series and I'll look for in the Episode!!

Nancy, I trimmed the photo and then blew it up.  On the far left is "half a person."  Next to him is most likely Joe C.  At least it is somebody in a military uniform holding a video or film movie camera.  From other accounts, I know Joe was at the Embassy from early on during TET 68.  Therefore, I'm sure Dickie is right.

Brinna Dandrige:  I'm going to have to watch now:

Carl Widdop-Sonka:  I remember that scene, but didn't recognize you.  I'll have to look at that part again.  It sure was a frightening situation.  Horrific!

To see the short clip from "The Vietnam War" showing Joe Ciokon, sign into

Please note that it is not an ordinary "Click Here" link.

Joe is from about 9 to 12 seconds.  He is kneeling while taking a shot of a running MP and then he stands up.

Jo Ciokon:  Left Panama December 1963. Second tour, 1974-77.  Unforutnately film was either destroyed or sent to DAVA until transferred to National Archives like everything else.  Have some stills of the Saigon news set which are in my profile folder.

Brinna Dandrige:  Thanks!  I always liked hearing you sea stories.

CA Palumbo:  Do you have any Panama pictures?

Gene Fredericksen: Damn, Joe, I didn't know you were at AFVN in '68  Bravo Zulu Shipmate1

Gerald Lafon:  The Marines of Sub Unit 1, 1st ANGLICO could have told them about the naval gunfire support we provided the Korean and Vet marines up in I Corps--Da Nang/DMZ area.

Shortly after Ken Burn's documentary on the Vietnam War was broadcast,

I saw myself in Episode Six of the PBS series on Vietnam.   Years ago CBS did a series on the Vietnam War and in the episode about the 1968 TET Offensive, the cameraman caught me outside the US Embassy Wall filming an MP running towards the gate to join the battle.  I'm wearing cami greens and using a Bell & Howell 16mm film camera.  I was doing the midnight radio news on AFVN (AFRTS) when the attack began.  I grabbed our gear an a Marine working as a broadcast engineer who had a weapon and headed up the street to the Embassy.  There's more to that story too lengthy for this post.  Memories.

Odell Terry:  I am glad you made [it] home my brother.

Chris Kelley:  I will check that out. Approximately how many minutes in from the episode title under "Vietnam War"?You are one hellova brave sailor far more than i can imagine going into a firefight like that armed with a movie camera.  Saigon was no ????. Jumpin' Joe!​

Cory Drake:  Looking at all these comments and knowing you for the last...28 years?   ...you do realize that you're something of a legend, right, Joe?

The above is only a portion of the many comments made by Joe's friends.   My apologies if your response is not included.  [Webmaster]

Cory Drake;  No kidding?  That was YOU?

Joe Ciokon:  Long ago and far away.  No, haven't been back and no interest in going.  Same thing about Lebanon.

Joe Ciokon:   It began at midnight January 31, 1968 and lasted till mid-morning.

Chris Kelley:   I am watching your episode right now.

Bill Graves:  So far, I get the feeling that Burns badly needed somebody on the staff that knew something about the Navy's involvement in the Vietnam War, and a few seconds of carrier launches, you would never know that the Seventh Fleet even existed.  He needs some Det. Charlie input.

That is such an interesting photo, Dickie.  The hospital personnel are wearing flak jackets and helmets but the others, who assume are journalists (?) and maybe a serviceman, are bare-chested.  I can’t tell which one might be Joe.
Nancy

Chris Kelley:  It was super brief at the start of the embassy firefight.  I could never recognize you since it was probably less that 2 seconds.

Ed Wilson: Wow, I recorded the seires.  That's special that your part of it.  Bless you, Joe.

Two photos of Joe Ciokon using a 16-mm camera during TET '68.  The US Ambassador has his hands in his pocket.

Milt Baker:  160 lbs and a crew cut?  oh, yeah, that's the Joe Ciokon I remember. Saigon was a very different place almost 50 years ago, wasn't it? I haven' been back sine the fall of Saigon.  Have you?

Joe Ciokon:  It is very long.  That event lasted most of the day as I went back three times.  It led to my taking the 6 O'clock anchor for the rest of my tour.  It also involved connecting with some [of] my Panama buddies.

Joe Ciolon Chris Kelley:  Dang!  Wish I knew that.  I would have told the family to check it out.

Joe Ciokon:   Just learned you can go to the website and watch an of the episodes you choose.  Neat.

Sonny Auld:  Glad you made it home alive, Joe.

Al Quiroz:  Do you remember the date and time? 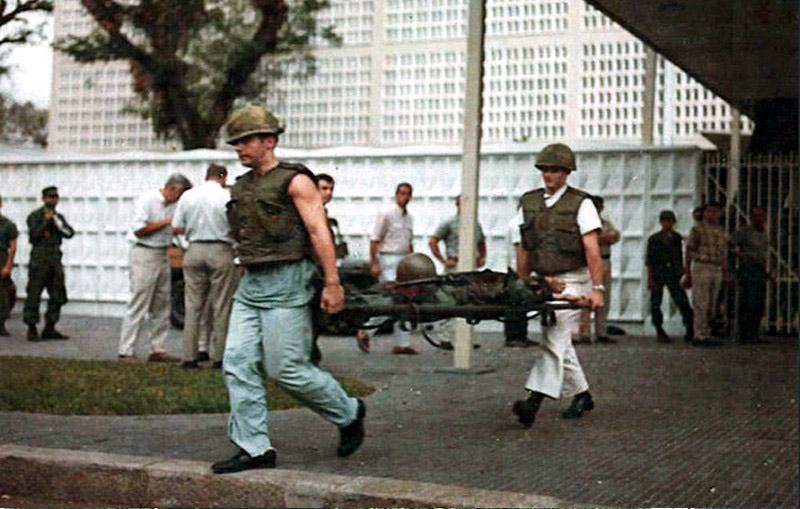 Ed Wilson: Wow, I recorded the series.  That's special that your part of it.  Bless you, Joe.