​​​​​​Some AFVNers have told their story of how they got into broadcasting elsewhere.   See the following:

Charles B. "Chuck" Adams  CPT, USA  Network News OIC, Saigon / OIC, Da Nang 1970-71
Some of his photos plus a good story about how Chuck was able to get assigned to AFVN.   The story is part of a
longer group discussion on censorship.

J.B. was not with AFVN but was evidently an avid listener and copied a number of programs.  He contacted the Webmaster

recently and agreed to the posting of a number of his recordings and other items but asked that he remain anonymous.

Forrest Brandt (As above)   Photos of Washington D.C. War Memorials

Forrest Brandt (As above)   Story and Photos of "Ole Miss" when Forrest visited his alma mater in 2012.

This link goes to his photos posted on the Flicker Website.

were part of AFVN from the very beginning to the very end of the station's existence.  For that reason, he deserves a

not from a message but is from a letter from Bob to Dick Ellis.  Dick then emailed it to the AFVN Yahoo Group.

Laurie Clemmons Allgood  SSgt, USAF  Saigon  71-72     Picture of her as a policewoman in Huntington Beach, CA

Don Dornberg, SP5, USA  Radio, Pleiku 1967-68
Dick Downes  SP5, USA  Saigon / Da Nang  (69-70)  - A story about his time in Vietnam working as a correspondent
out of the Cam Ranh Bay Information Office and then Det 2 on Monkey Mountain.   Also a couple of photos

after the Vietnam War ended.

Paul Kasper  SSG, USA  1968   Paul was never with AFVN but was in Vietnam as a member of a flame-thrower-equipped

Armored Personnel Carrier (APC) team.  During his tour, he became quite a avid AFVN fan and, over the past several

years has helped greatly in providing information on AFVN and with this website.  You may know him from his email

can not be accessed.  If anyone has copies or can access any of them, please send them or any information on how to

AFVN days about Donald E. White, SSgt, USAF and an SP4, USA who didn't know any better even after being warned.

Mike McNally  USA, DOD Civilian and Contract Employee 1967-2015  While he was never with AFVN,

since 2013 Mike has been a reliable and regular contributor of items for the AFVNVets.net website.  I have added

In Alphabetical order by last name.
(Click on the last name to go to that page.)

Photo and Stories from AFVN Veterans

(and friends of AFVN) 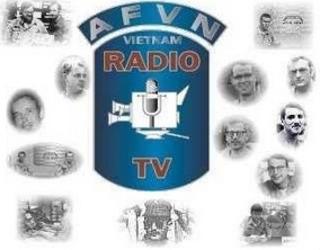