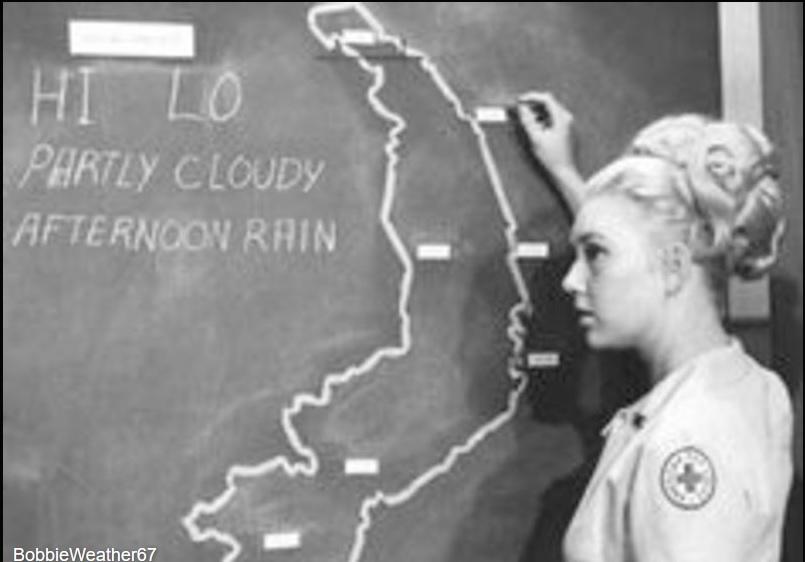 Bobbie in front of a weather map.

Received from Paul Kaskper in September 2016.

Confirmed as being Bobbie by Dick Ellis.

Clipping showing a photo and part of an article on Bobbie.

Titled "visiting Saigon suburbs" but the background look more like a military facility of some kind. 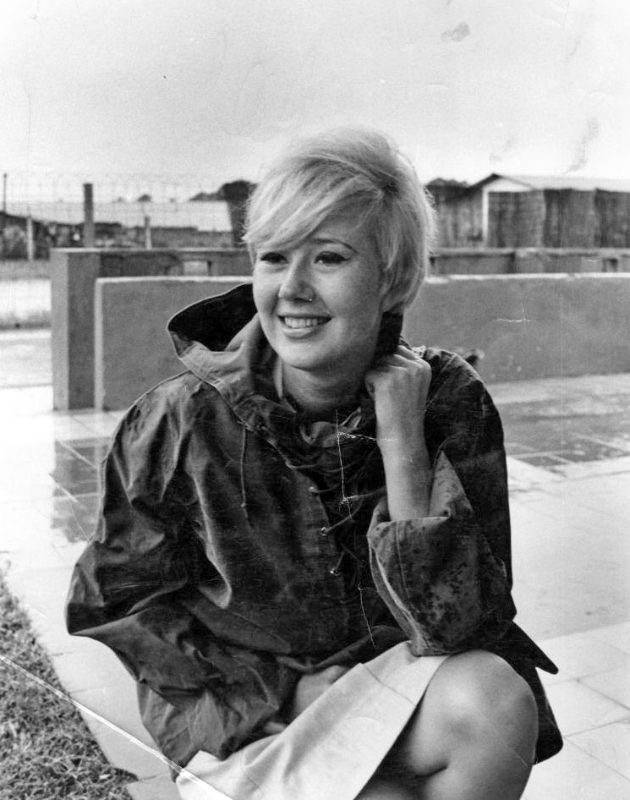 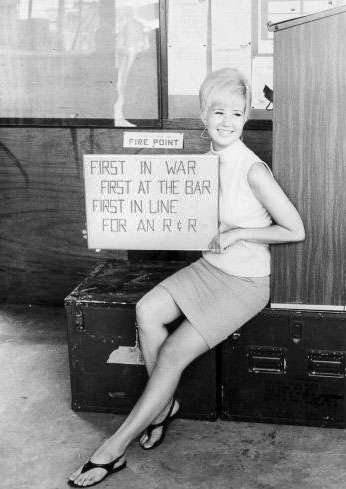 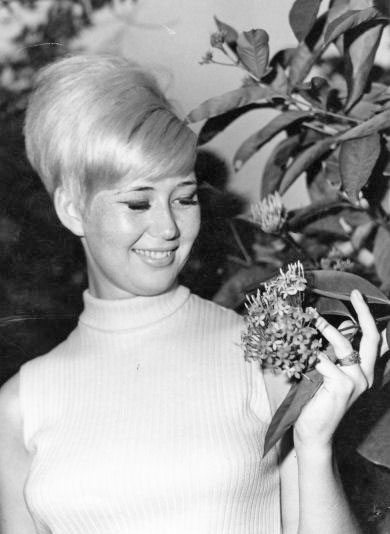 Barbara Oberhansly was not an ordinary child, nor was she an ordinary adult.  She had a mission in life to fulfill, and it was apparent from the day she was born on August 18, l944, in the little town of Afton, Wyoming.  At that time her father was serving as a Marine during World War II.  She was a joy for everyone as she grew and matured.  She and her family moved to Ogden, Utah, Salmon, Idaho, and eventually to Tacoma, WA, where Barbara received her elementary and high school education.  After graduating from high school, she attended BYU in Provo, Utah for one year, after which her adventurous spirit took her to San Francisco where she secured a job at Wells Fargo Bank.
Barbara was not the typical "child of the sixties."  Quite the opposite, she was glamorous, sophisticated, intelligent and liked the nicer things in life.  She soon purchased a lovely little convertible sports car, acquired a fur coat or two to enhance the glamorous wardrobe she wore on a daily basis and always wore the perfect jewelry to set it all off.
But Barbara was also blessed with a thinking mind and a sense of justice and caring.  Each day, as she walked from her apartment to the bank, she passed the office of The American Red Cross.  Eventually, she turned into the doorway of the Red Cross and started inquiring and asking questions.  The results were that she walked out that day with a uniform and a plane ticket to Vietnam.  The sports car, fur coats, fancy clothes and jewelry went into storage and she was on her way to Vietnam, where her role in life became readily apparent.  She spent a couple of years meeting the service men and the Vietnamese people and loving all of it!
"My job is fascinating," she wrote home soon after arriving in-country.  "I'm the personal secretary to the Red Cross' Public Relations man in Vietnam.  Right now my boss is trying to get me on T.V. as the weather reporting girl from Saigon.  It would be a real ball, but the competition is quite stiff so I'm not counting on it."  Needless to say, Bobbie got the job at AFVN.  It became the highlight of her time in Vietnam, and she gained much notoriety.
After completing her Red Cross duties in Vietnam, Barbara returned to California and went back to work.  Unfortunately, her health began to deteriorate in the fall of 1968 and after a week's stay in the hospital, she passed away, leaving many loved ones with broken hearts.  But her legacy remains; she will always be remembered for her charm, beauty, and sweetness, and for her willingness to serve.

[Most of the following has been taken from MACOI.net/biographies.

It can also be accessed directly by clicking on "BIO" following Bobbie's name in the AFVN Roster.]

Bobbie Oberhansly was the first of two "Bobbie, the Weather Girls" at AFVN.
Unfortunately, because Bobbie Keith, who followed Bobbie Oberhansly, served
much longer the ""First Bobbie" is not all that well know.  It is, therefore, replicated