From:  Edie Weller
Dated:  September 8, 2016
Subject:  Correction to Harper's Page
Dear Jim,
Thank you for your kind words.  I guess I need to explain a bit about my attitude towards the website I joined years ago.   I joined in the hope to get in contact with people that I felt close to and cared for  in the year 1971-1972 and ended up writing to mostly people unknown to me and most likely both my attitude and the attitude of some  of the men  turned out to be  non productive towards the site and I decided to leave.
I will give you a little of my history with AFVN so you may judge for yourself whether the information I am sending and perhaps questions you might have  are answered correctly.
My husband and I lived in Vietnam from 1968 -  1972.   My husband (PanAm) invited various LTCs  and some men of their choice for dinner to our home throughout the duration of our stay in Vietnam. The LTCs were   Adam, Price, Souville, Casipit.  There are still names that I remember from my early years in Vietnam (my husband , family members and people that know me claim I have a memory like an elephant) however most names that were important to me were the ones that I did get to know working as a volunteer to the OICs Souville and Casipit in the years of 1971-1972 as Girl Friday to the OIC.  Orders taken only from them and only answering  to them which resulted in some men  naming me the "Dragon Lady."  Main cause was the infamous phone number that connected you to the US directly and that one was only allowed to be used in an emergency.  Direct orders from the OIC,  guard with your life.  Believe me we came up with some weird and ineffective methods  to keep that line from those poor guys who wanted so much to talk to their loved ones. The number strangely in my mind was Tiger 3885 however will stand corrected  if some one claims it to be 3185.
The change of names from Armed Forces to American Forces happened between the end  of 1971  and the beginning of 1972.  LTC Souville came one morning to me and instructed me that our letterhead has changed and from now on I should type American Forces Radio and Television Network.  The intent was to represent a kinder approach to the dilemma  Vietnam.  Looking around me after the announcement we still had the same look on our faces and tried to make the best out of a bad situation.
Now  the MAJ LaMonica's correct  first name is  AL and not HAL.  He was in non-military terms the right hand man to LTC Lawrence W. Souville.
Now to your invitation to join the reunion in September.  I lost my husband Volker in February and am not really up to traveling .  I know we are all getting older and should not waste time however I do need time to adjust.  Perhaps another time.
If you have any questions please contact me.
Take care,
Edie

According to the best information I can glean from the AFVN Website the date of the change from "Armed Forces" to "American Forces" was as of July 1, 1967.  A"Fact Sheet" prepared by Randall Moody in early 1968 uses "Amerian Forces Vietnam Network."  And, I know we were using "American Forces" when I was with AFVN between August 1970 and June 1971.  It may be, however, that it might have taken some time for those who had been with military broadcasting for years to always remember the change.

From:  Edie Weller  (Sent via the AFVN Contact Page)

What a shock to learn about Volker.  Chu and I send our deepest sympathy.
Of course, we never formally met either of you, but over the course of these years, it seems that we know you quite well.  As for me, every time I think of you I think of Volker too, and I'm sure that will not change.
You are as much a part of AFVN as Adams, Price, Souville, and Casipit . . . and Jim White. You have been a great help to the MACOI Website, both in terms of shared material and encouragement.
If I did not know you better, I'd urge you not to slow down, but I do know you, and I know you will continue just as before.
God bless you!
Joe

I thought you would enjoy reading this.  More from the girl in the “AFVN Music Power” photo.  This is from Edie Weller explaining how she became involved at AFVN in 1971.

“I need to explain to you how I ended up at AFVN.   It all started with Bobbie's departure.  We had an overzealous Military Sales Rep (at Pan Am) by the name of Greg Swofford  who decided on his own that I should be the next weather girl.   Trust me I also knew I was not weather girl material.    Wrong profile and I happen to  dislike cameras.   Matter of fact I despise them however love being behind them.  So I avoided being a weather girl by finally taking the test however making sure wearing an unsuitable attire like green and white polka dot dress, wearing glasses and when asked if I could read from the teleprompter I immediately made sure they believed I could not.
However AFVN stuck with us and therefore I went through four generations of  LTC.  They and their officers  came over for dinner parties and serenaded me after about three black Russians after curfew with " When Irish Eyes are Smiling "  very appropriate for a 50% Scandinavian and 50% German.  I loved every minute of it and the neighborhood especially the Bishop of Vietnam must have thought the crazy Americans were definitely losing it now. The LTC's in question were  Adams, Price, Souville and Cassipit.  Larry Souville wanted very much to have an American woman as a Girl Friday at the station and I bored out of my wits (Mrs Weller was not allowed to work at Pan Am even though I knew the business in and out and finally went to help  straighten out the mess when the Military announced in a grandiose way that our GI's were allowed to fly home for Christmas without first checking where to get the planes from supporting the rush out of Vietnam) with manicures, pedicures, reading etc. all those things that certainly made your life easier however definitely more meaningless, I looked at him and asked if I would do.
Well, I did and one day after everything was cleared with MACOI or whoever I opened the door to the infamous reception area said good morning to whoever was lounging around turned the corner to Larry's office and my words were:

"Good morning, Sir, reporting for duty".  The rest is history.  Cassipit wanted me to stay on and so I did.  My  official title was Girl Friday to the OIC and I only reported or took orders from them.  I worked as a volunteer Monday through Friday from 0900 to 1700.  Met some wonderful people at the station and cared for everyone very much and it was hard for me to say good-bye, but also that is history . . .
Now have good day and I might have answered questions you might have had and thank you very much for the picture you sent.
Take care,
Edie

Volker & Edie Weller went as US citizens for PanAm to Vietnam from Chicago 1968-1972.  He was the Sales Manager South East Asia for PanAm.  I was a volunteer at AFVN 1971-1972 and, no, he did not go nuts however enthusiastic could be the right terminology.  Never did in his life time which actually drove me nuts.  Al Toppings was the last Director of Pan Am in Vietnam.  The one before him was a man by the name of Bob McElhannan (I hope I spelled that name correctly).  Now to all a very healthy, happy and prosperous New Year.

Thanks for the correction.  Any chance of your coming to the AFVN reunion at the end of this month?   It would be nice to meet you in person. 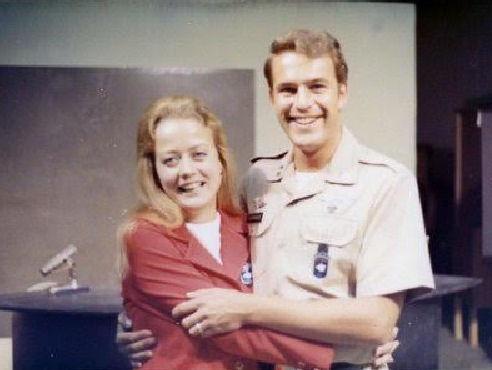 Edie Weller with CPT Bob LaFrance, USA, Adjutant, on her last day of work at AFVN.

(At least the "Dragon Lady" got along fairly well with the Admin Officer.) 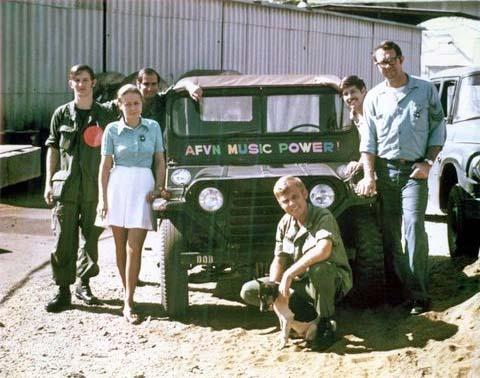 Edie Weller with others at AFVN in 1971

Photo is from Edie Weller, who volunteered at the statiion in 1971.