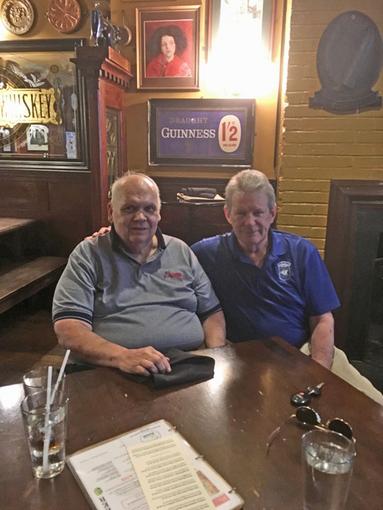 My name is (Sgt.) Bob Wilford. I was the TV news anchor and radio announcer for AFVN Det 3 for the first part of 1969, and  was Program Director for Det 4 the latter part of that year.  After discharge from the Marine Corps, I was hired by WQAD-TV, the ABC affiliate in Moline, Illinois as a news photographer which lasted one weekend.  I was asked "Day 3" to fill in for an ailing sports announcer and was promoted following that newscast to the Sports Director job.  For the next six years, I was sports anchor on all telecasts, as well as frequent weekend and sign-off news anchor.  Best part of the job turned out to be marrying my weekend weather girl.  We now live in the metro Atlanta area.  We have a son who began his career with Cumulus Media, just to continue the broadcasting thread in our family.

For another story from Bob Wilford, go to AFVN Organization, Det 3, Pleiku.

The following is from a message from Bob Wilford dated November 15, 2017.

I did not plan to send additional photos.  I only have a couple more of me, anyway, and though I might qualify as being old enough to have some historical interest I certainly have no value.  And yes, those I sent were taken early 1969, April or May.
Dragon Mountain, Det 3, is the first group of buildings as you crest the top of the hill, (lower left in the photo). The  mountain was in the shape of a horseshoe, and this photo would have been just past the point where the road from the bottom met the road at the top of the hill; turn left to access AFVN and the other units, turn right to the other end of the horseshow to get to the South Vietnamese Army  compound.  Inside the horseshoe was a "bowl" effect, a very steep descent into the bottom of the bowl.  The back side of the mountain was too steep to be climbed and defense on the back side was left to the 4th Division folks, who patrolled the base of the mountain.  All the downed aircraft were on the face of the mountain below the last several buildings at the "end'  of our road.  It was an amusing afternoon once when a lone person tried to drop a mortar on us (or near us).  He spent about an hour walking shells up the side of the mountain.  We continued return fire with a growing arsenal of a variety of weapons before finally calling in a gunship to cover the base of the "bowl" but never found a trace of spent shells or blood trails or anything.  On a couple of occasions when boredom set in, we'd exchange fire with the South Vietnamese across from us-aiming low of course and enjoying the contrast of the red tracer rounds with the green ones.
There must have been some expansion to the compound after I left.  There weren't this many building when I was there.  And  photos taken later show the studios must have been rebuilt.  We rebuilt the studios once after the sapper attack in May '69 destroyed it, but we rebuilt to conform to the original building footprint.  I don't recognize the photos of it from photos taken two years later..
As for the other buildings , no one below command level knew who or what occupied them.  Army signal corps and air force communications had buildings but we never mixed with anyone there.  At my level we just referred to "intelligence" operations.  We'd run across personnel in t he mess hall but never conversed beyond a greeting. Working with a Montagard village nearby I was assigned an interpreter who was understood to be CIA.
And I guess the short bio I submitted was confusing, as I didn't meet my wife until I had transitioned to commercial television after discharge.  She was never affiliated in any way with the military in any capacity.  Sorry about the confusion.
You're doing great things. Wish I could help you.  I am developing additional symptoms of Parkinsons' disease, which the VA says was as a result of Agent Orange poisoning, and it's getting difficult to type. 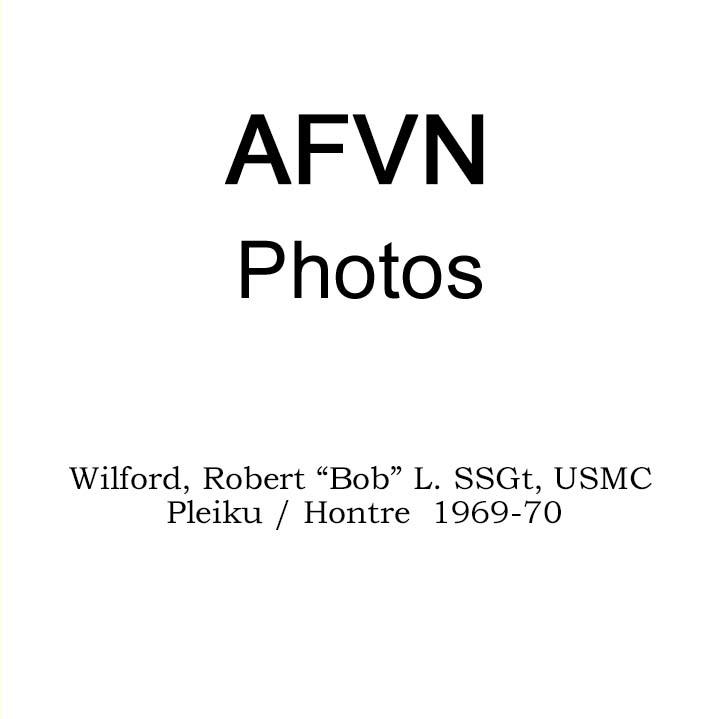 Please note that the PDF slide file will show in another tab or another window depending upon which browser you are using and your browser's settings.  Because some of these slide shows are fairly large files, it may take a few seconds for them to appear. 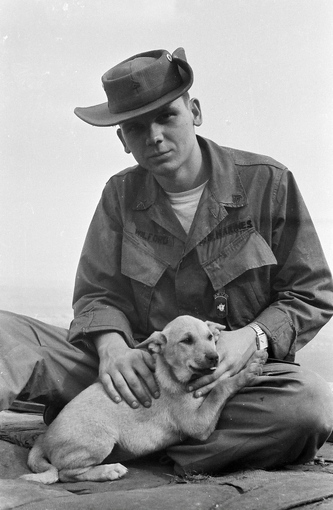 Bob Wilford with the Detachment Pet

What happened to AFVN-Hue was tragic, terrifying at the time and still sad today. However, I am interested in how the attack on Pleiku in May, 1969, was classified. We were told we'd been "over run" by sappers, who successfully used rockets and satchel charges to inflict a lot of damage on Det #3. I recall the shout "g..ks in the wire" and the order to report to our assigned  positions. As detachment machine-gunner, I was directed by Gunney Johnson to the most likely point of entry at the perimeter facing 4th Division Hq. Initially the word was passed that there were sappers behind us. Of course it was bedlam. the land line phone wires were cut and we could not communicate with Lt. Cutlip. Monsoon rains made visibility impossible. At  one point, a support helicopter gunship, flying below our sight line, crashed into the mountain.We heard explosions behind us, which was concerning as that meant to us that attackers were on that very narrow strip of level ground we called "home." After action survey proved that the TV studios had been blown literally off the mountain by a rocket, other buildings of other neighboring units damaged by satchel charges placed or tossed (found one un-exploded in the bed of the deuce-and-a-half parked next to the hootches).In the end, the sappers all made it back out of the compound, and a patrol the next day found no bodies or blood trails. So in that sense, "over run" I am sure has a specific criteria for use. To us, well, we'd been overrun. A piece of shrapnel had severed the coax cable partially-we had sound, but no video. The back wall of the studio was gone and the remaining walls damaged to the point we couldn't just turn the set 45 degrees for the evening newscast. so Rich Brooks and I were directed by Lt. Cutlip to prepare our copy and deliver at least the audio portion. To downplay the extent of the damage, we'd put up a slide from the control truck. We were also cautioned to expect another attack that night. So, Rich and donned helmets and flak jackets, and decided to clean our weapons during the newscast. We pointed a camera at the news desk and took our customary places in uncustomary garb. Engineering was working feverishly to complete repairs and get us fully back on the air. And they achieved their goal-in an instant we had full video back and the central highlands was treated to two guys in battle dress behind a desk and featuring a panoramic, unobstructed view of nature from the top of Dragon Mountain as seen through the missing walls.