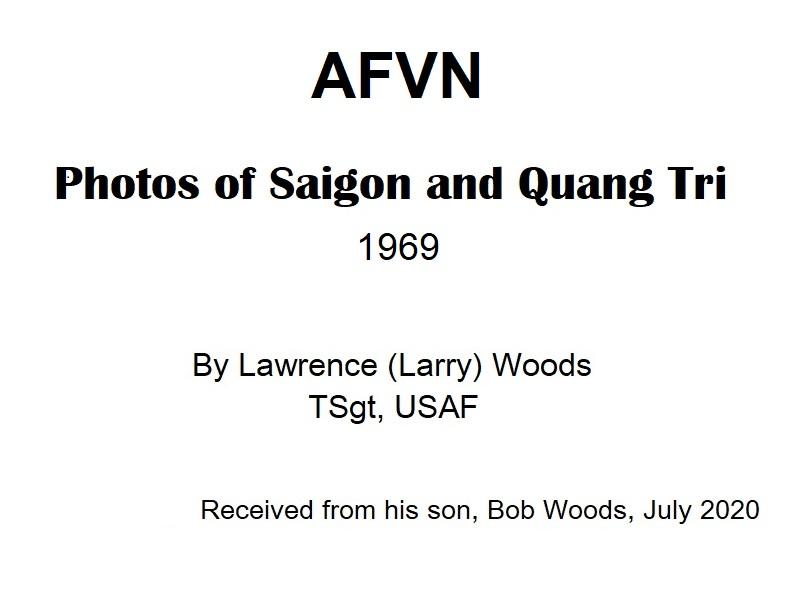 Please note that the PDF slide file will show in another tab or another window depending upon which browser you are using and your browser's settings.  Because some of these slide shows are fairly large files, it may take a few seconds for them to appear.

Larry was born in Wilkes-Barre, PA, on April 6, 1934 to Leo and Nell Woods.  He had 2 brothers, Leo and Tom.  He graduated from Mary Mount High School, Wilkes-Barre, in 1952. During and after High School he hosted a radio show on WBRE radio, Wilkes-Barre and then on a station in Allentown, PA.  He married Nancy Toole at Saint John the Evangelist Church, Wilkes-Barre, Pennsylvania, in June 1954 and they eventually had 3 children; Robert (Bob), Paul, and Eileen.

Larry enlisted in the Air Force and completed basic training at Sampson Air Force Base, near Lake Seneca, NY.  Following training he was stationed at Dover Air Force Base, Delaware as a clerk in the Services Squadron.  He continued to work part-time as a DJ on a local station in Dover, Delaware.  He auditioned and was selected to be a radio and television announcer for Armed Forces Radio and Television Service (AFRTS) and took his first such assignment in 1956 to the first overseas military T.V. station, which was also the first T.V. station in Portugal, at Lajes Field, Terceira, Azores.  Following this tour, Larry was selected to be an Air Force Recruiter and was assigned to those duties in Upper Darby, Philadelphia, Pennsylvania, from 1960-1964.  While assigned in Philadelphia, Larry moonlighted as a DJ on nights and weekends at WCAU Radio.  Much to his and his family's delight, Larry was again assigned to the AFRTS station at Lajes Field, Azores in 1964.  In this assignment, he hosted the morning wake-up radio show under his radio handle "Old L.W."  He was also the NCOIC of the radio station and also presented the evening TV news broadcast.  During these tours in the Azores, he and others from the station also helped local Portuguese broadcasters with the local Radio Clube de Angra.  Larry and his family left Lajes in the summer of 1968, headed for a tour as a Public Affairs staffer at Chanute Air Force Base near Rantoul, Illinois.  After 1 short year, he volunteered for a tour in Viet Nam.  He was assigned to AFVN Saigon where he served as a news announcer and DJ from the Summer of 1969 to the Summer 1970.  Following his tour in Viet Nam, Larry was assigned to the Air Force Training Center at Medina Air Base, San Antonio, TX, where he performed in and did voice-overs for Air Force training videos.  Larry retired from the Air Force following this assignment, whereupon he and his family returned home to Wilkes-Barre, Pennsylvania.  In retirement, Larry hosted a daily radio show on WNAK radio in Nanticoke, Pennsylvania for several years.  Eventually, Larry left broadcasting and became a Veterans' Counselor in the Wilkes-Barre Employment Office of the PA Department of Labor.  Larry retired from the State in 1990.  He remained active in his church as a lecture and in the choir.  He was an avid golfer (or "duffer" as he would admit) and loved the water.  He and his wife, Nancy, regularly enjoyed ocean cruises with their close friends.  Larry died of a heart attack in February 2000 (Age 65).  His is survived by his wife, Nancy, and their children and grandchildren.

Photos and Stories - A to M
View on Mobile