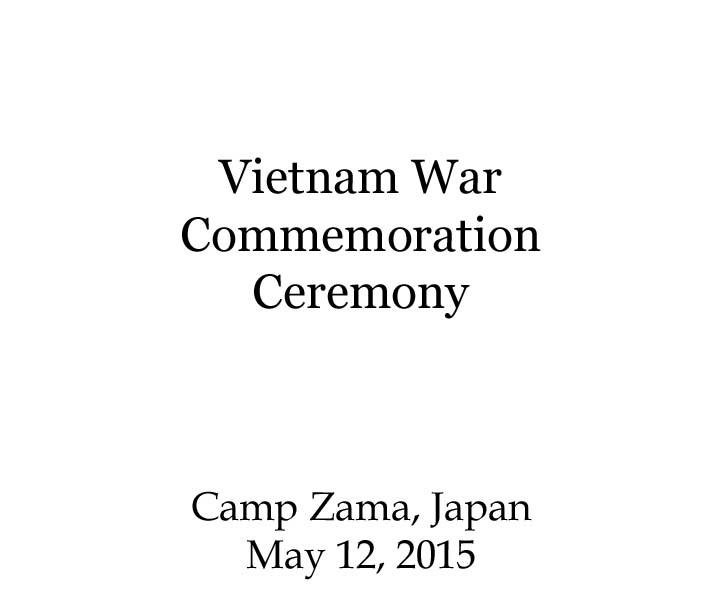 Please note that the PDF slide file will show in another tab or another window depending upon which browser you are using and your browser's settings.  Because some of these slide shows are fairly large files, it may take a few seconds for them to appear,

A Short Video of Some of the Highlights of the Ceremony

Available at the following link:

Available at the following link:

Click below to go to the Department of Defense website shown at the top of the Vietnam War - I Served decal.

It contains a lot of information about the Vietnam War.

​After CSM Slade's talk, all of the Vietnam War veterans in attendance were called up on to the stage and given a Certificate of Appreciation by the Commanding Officer, USArmy Garrison, Japan as well as a Certificate of Recognition, a medallion and a Vietnam War pin by the VFW Post at Camp Zama.   Since I had arrived rather suddenly, I received blank certificates but since then have received completed versions.   All of these items plus some giveaway items are shown in the following PDF files.

Nice to be here-Thank you all for coming to this 50 Year Vietnam Commemoration Ceremony.

[Added by Jim White: At this point, CSM Slade deviated from his script by asking "Can you tell me the name of the name of the most popular song among the GIs in Vietnam?"  There was a moment silence, and then I (Jim) spoke up: "We Gotta Get Out of this Place."  CSM Slade affirmed that I was right and then continuing by saying "many soldiers would listen to that song with tears running down their faces.]

How many of you Vietnam Vets Remember the Song "We Gotta Get Out Of This Place" by the ANIMALS?  Do you remember singing the Chorus at the TOP OF YOUR LUNGS and sometimes with TEARS running down your face?

Today we recognize those of us Veterans that---- "Got Out of That Place", but especially we honor those Who Did Not.

When SFC Rodriguez asked if I'd speak, I said Yes because I feel it is a privilege to do so.

DOES It seem like it has been 50 years ago you were in Nam or just yesterday?  For me, sometimes IT IS ANOTHER LIFE TIME-- ago and sometimes, it just happened.  It's been said that it takes 50 years after a Historic Event for the true facts to come out. MSG Odom and SFC Boudreau and their team created some very High Quality Posters with some of those facts on it.

THESE LAST FIGURES ARE REALLY INTERESTING TO ME:
A Major network surveyed a large number of Vietnam Vets  and compiled these results.
8.    97% percentage of the soldiers that served said they were glad they did  AND 74% said knowing the outcome, they would do it all over again
9.   2/3 of all the Soldiers that fought in Vietnam were volunteers, only 1/3 was drafted
10.  The Ratio of Enemy Killed in Action to our Soldiers Killed in Action was 17 to 1

These are the statistics of Brave, Tough, Patriotic Soldiers who just did what their Country asked-----So I still take issue when anyone says we lost that War.  We didn't lose, the Folks in Washington D.C.  just wouldn't let us win.

Now every Soldier that went to Vietnam has a little bit different view of the War.  There were Chopper Pilots, Cooks, Mechanics, MPs, Doctors, Infantrymen, and Rangers.  That was what I was, a Ranger.  I was with "N" Co. 75th Inf.  Rangers.  We were the LRRPS attached to the 173rd Airborne Bde.  (That's the same unit that CSM Dumont-Carrion's father served in.)

I,  like so many others,---- after several months of fighting, basically just doing was I was told to do, following the restrictive Rules Of Engagement----- I didn't really know what the War was all about.  Why I was taking lives of people I didn't know,---- I didn't hate,----- just people.     But one day that all changed for me.

[Added by Jim White:  CSM Slade, from the heart, told about one time his small group of five men had received a radio message telling them that a small hamlet was about to be attacked by the Viet Cong.   Other units were going to their rescue but Slade's group was the closest.  Even so, it took them several hours to get through the jungle and to the village.  They were too late.  By the time they got there they Viet Cong had already attacked and left.  Every man, woman, child, pig and chicken had been killed--no one and no animal was left alive.  One young girl had been sexually abused, tied hand and feet, hung upside down from a tree and then disemboweled.]

No one has the right to do that to another person.  Cowards and bullies have to be stopped and it was then clear to me that I would try to do my best to stop them.

As I said earlier, each Vet can tell their stories and they'll be very different.  But no matter what capacity you worked in, you need to be proud of your service.  Stick out your Chest and hold your Head up High.  You did what was asked in the most difficult times and under the most difficult circumstances.
After I returned from Vietnam, I dedicated my life serving Soldiers and their families.  I served in the Army for 30 years, at 60 years old, they told me I had to retire,---- but I couldn't.  So I started figuring out ways to continue to serve through volunteering in different ways.  Right now my good wife and I are here in Japan for two years serving as Military Relations Volunteers for our Church.  We are just here to do whatever we can to help in any small way.  We work at the Red Cross Office, teach a variety of classes, even sometimes take cookies to soldiers and their families that could use a friendly smile.

I have the deepest respect for all who serve their Country.  I am so glad the soldiers today are supported by the people of the United States.

When the Vietnam Vets returned home, they weren't welcomed, so us Vets started welcoming each other home.  So in closing, let me say:
​
WELCOME HOME,  God Bless you all and your Families.  Thanks for your time.

Sometimes serendipity runs wild and nice things come about by chance.  I had gone to Yokosuka Naval Base on May 10, 2015 for some medical checkups, etc.  Did most of them on May 11 and then May 12 was a free day so I decided to go to Camp Zama, about two+ hours away by train to turn in some paperwork to the Tri-Care Office there.  I got to Zama about 1130 and decided to go to the Golf Course Club House for a "good breakfast" for lunch.   I ordered bacon and eggs, pancakes and coffee.  While waiting for my order to arrive, I noticed that the Camp Zama Fire Chief walked in by himself.  I really didn't know him but he wa always recognizable by his tall, round, white "fire chief's" hat.  I invited him to come join me and he did.  We got to talking  and realized we were both Vietnam veterans.  Upon which, he immediately said that there was a Vietnam War commemoration and Vietnam veteterans recognition ceremony being held at 1400 that same day and that I should come.

Being in old jeans and a white polo shirt, I was hardly dressed for the occassion but I said I would be there.   One reason being, perhaps like many of, I had never been thanked for my service other than when going through an airport and seeing an active duty soldier, going up and thanking him or her for their service, and adding that I was retired Army; upon which he or she would reply with a "thank you for your service."

Fire Chief Moore was waiting for me when I got to the auditorium where the ceremony was being held.   He quickly introduced to SFC Daniel Boudreau, the Operations Sergeant for US Army Garrison, Japan, Mr. Randall Hines, the head of the VFW Chapter at Camp Zama, and Retired Army CSM Jim Slade, who was the featured speaker.  I even ended up sitting on the front row of the audience area also with ther other retirees and honored guests.  Must admit I felt very much out of place because nearly everyone else was in Army Blues, suits, or at least work cammies.  I also met MGEN James C. Boozer, Sr, the CG, USArmy Japan, COL Joy L. Curriera, CO of US Army Garrison, Japan and others.

After a few minutes, the Color Guard marched out on to the stage and the ceremony got underway.  See the link for a copy of the program and the slide show below for some photos of the event.