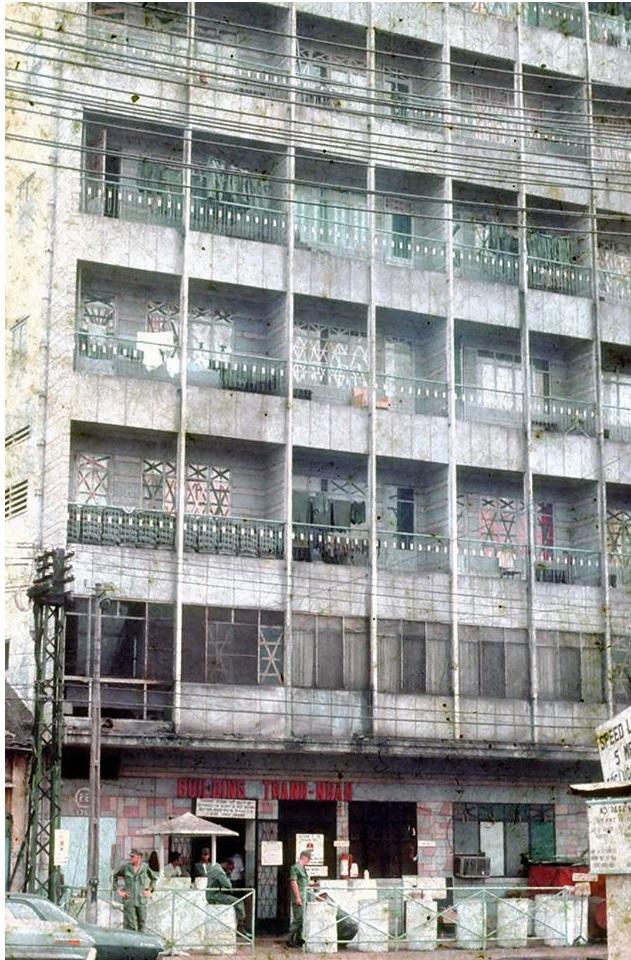 In 65 the then clinic was in the building right between the road split.  Above it was a BEQ (forget the name) [Metropole BEQ?] that was bombed later that year, one of our guys was there and got rocked (Ron something  [Heseth?]).  The picture looks like it was taken from the Annex where I first bunked.
Bob

Both are good pictures but my memory of the Kyson Annex BEQ was that the entrance was to the corner and to the left a ways.     Jim White

Joe Van Vooren, Bob Mays and Bob Lawrence (but possibly not in that order).

Bob Mays suggested that it was taken in the Enlisted Mess at MACV when the lower grades were living on Tan Son Nhut.

This same photo is elsewhere on this website, and I think I attributed it to being in the Ky Son Annex Mess Hall.  Webmaster

Note: Screen shots and/or attachments are in slide show further down.

That little clinic is where I got patched up.  Nothing can beat morphine anti-gravity potions.
Ken

Mike,
I found Google Maps interesting but a little hard to control.  I don't think you found the Plaza Hotel.  The Plaza was much wider and only 9 or 10 stories tall, maybe even just 8 when we were living there.  Please go to https://www.afvnvets.com/afvn-2015-16.html for a very recent photo of the Plaza Hotel taken by Harry Simons just about a month ago or to Rick Fredericksen's slide file at https://www.afvnvets.net/pho-sto---fredericksen.html (towards the end of the slides) for a somewhat older photo of the plaza.  Your photo of a "12-story, only 5 windows wide building just ain't it."
Can't comment about anything else because I don't know the places/buildings all that well.
I am inclosing a PDF file showing what I think is the Ky Son Annex BEQ.  Sorry, but I couldn't get my computer make a screen shot (so I used my 45 and shot the screen!).  You can see the original Google Maps at: Click Here.
Jim W

It's interesting to see that AFVN people wound up at the Walling BEQ.  I arrived in-country in Aug 1968 and was assigned to the IO of the Capital Military Assistance Command (CMAC) and was a 71R.  All the time I was there, until June 1969, I believe the Walling was exclusively for CMAC EMs and NCOs.  I seem to recall that CMAC was deactivated in 1972 which then dovetails with the Walling being taken over by AFVN personnel.  Here's the Walling in 1969 - photo by Ron Duran.

[The photo, which had been received previously, is on this page, above.]

Hi Les!  Wow, a blast from the past.  Found a picture of you, me and Joe Van Vooren.  Would this picture have been taken in the mess hall across the alley behind our barracks?

Some comments on the above Slide Show that wouldn't fit on the slides.

Although this topic had already been fairly well hashed over more questions were raised in May 2016.  Webmaster

I vividly remember AFVN Saigon enlisted men being transferred to Tan Son Nhut airbase after the Bob Lawrence censorship comments.  But since I left AFVN in June of 1970, I didn't realize that AFVN personnel were moved back downtown in October/November 1970 according to afvnvets.net.
Below is the gist of what they said about the moves.  Can anybody shed any more light on this?

Paul,
Sounds like the move happened shortly after my departure, maybe that's why I don't remember it.  Sounds like your hotel adventure was not a very positive experience. 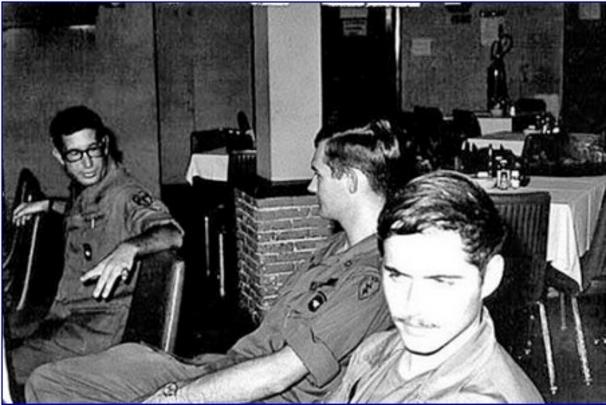 I was the Admin NCO at AFVN during this period and therefore in charge of getting everyone moved.  In other words, I would get a list of rooms available every few days and would then arrange for an AFVN vehicle to help get the guys moved.  I honestly don't know what prompted the move from Tan Son Nhut / Iowa BEQ to the Plaza in late 1970 . Maybe the "powers that be" decided everyone had been "punished" enough.  I remember the reluctance of many of the men to make the move--particularly when they had only another two or three weeks left on their tours.  Sometimes it took a lot of convincing on my part and I had to tell them that "You have to move and you will move!"  But, personally, I was certainly glad to go to the Plaza . At the iowa I was the Senior NCO and therefore had to run the duty roster for the nighttime CQ and guard, keep track of the ammo room key, etc. Everyday it was a "pain in the butt."  I think that the move from the Plaza to the Ky Son Annex was the result of the Navy doing a "snow job" the other services by convincing them that the Plaza should be "Navy only."  Again, I had to coordinate everyone's move with the MACV Billeting Office and again, get transportation, etc., so everyone could actually make the move.   I was in the Iowa from Aug 6 to Oct 22, 1970 in the Plaza from Oct 23 to May 9, 19971 and then in the Kyson from May 10 to departure on June 8.  Paul is right in that many of the Navy and Marine personnel, particularly the higher grades, lived elsewhere. PS: I wrote what you read on our website.

As backup to the above, I have kept a daily dairy since 1967.  Here are some of excepts related to the move:

November 13, 1970:  There were still a few AFVN enlisted men in the barracks at Tan Son Nhut.

November 18, 1970:  LTC Price (OIC) talked to everyone in formation about moving all of the enlisted men into the Plaza Hotel.

December 22, 1970:  Some of the enlisted men were assigned to the Metropole Hotel rather than to the Plaza.

Think that may be the AFVN snackbar. 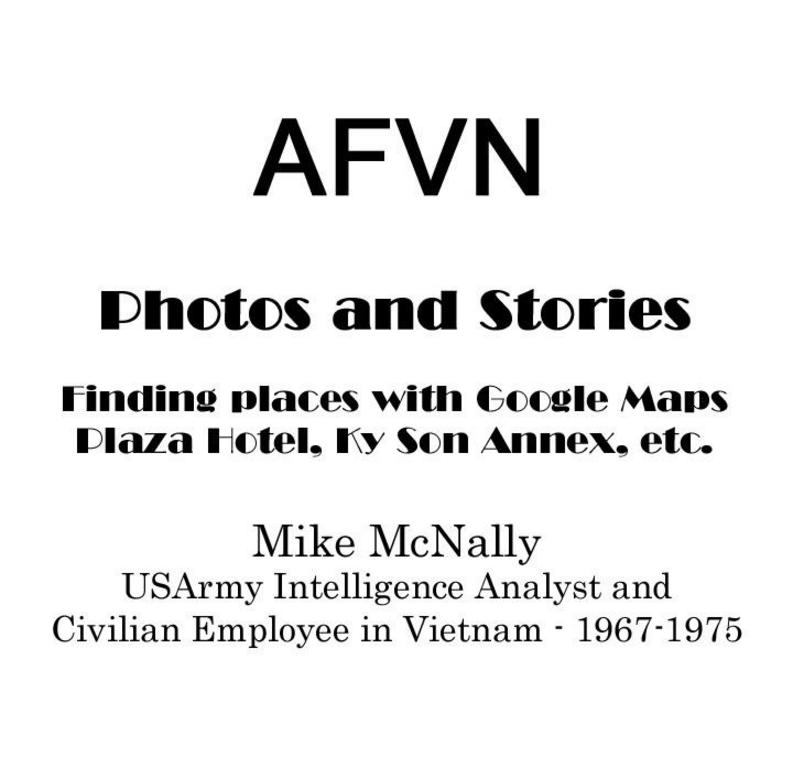 Paul,
I left in late December 1970 and don't recall anything being said that would indicate that there was to be a planned relocation of AFVN personnel back downtown at that point.
Les

Please go to Google Maps and enter "Saigon" in the search box. A map of the Saigon area should open on the right, and an info box with some small photos may appear on the left. Zoom in the map a little until you see an area you recognize. Then grab the Pegman icon at the lower right and drag Pegman onto the map. You should see some blue dots or circles appear. Place Pegman over a blue dot or circle until you see a small photo appear at that location. Release Pegman and the map should transform into a Street View Spherical Photo. You can spin the photo around and look in various directions. You can also look up and down to some extent.
If the photo shows a white angled symbol pointing in a certain direction, you may be able to click on the symbol and move in that direction. If you don't see any direction symbols, just look at the little map window in the lower left. You can move that map around and look for other blue dots or circles. Just click on one of the blue dots and Street View should open at that location. After playing with this for a few minutes, you should be able to move around easily.
Some main drags offer almost continuous movement. For example, Hong Thap Tu, Cong Ly,and Hai Ba Trung permit a lot of travel. Though most of the blue dots are in the Saigon, Cholon, Tan Son Nhut areas, I dragged the map north towards Bien Hoa and Long Binh and found dots in various locations. As more Spherical Photos are added, the Vietnam Street View will expand.
I've attached five screenshots I took in the Saigon area. Four screenshots show what I think were buildings that housed Americans. These buildings are the Medford BEQ, Ambassador Hotel, Plaza Hotel, and Pittman Apartments at 22 Gia Long Street. The fifth screenshot shows construction at a now empty lot on the intersection of Vo Tanh and Thoai Ngoc Hau. That  was the locatiion of the Newport BOQ, which stood alone for fifty years before being razed last year.
Most Spherical Photos are from 2014, but I have found some dated 2015. If you have ever been to the MACV Compound at TSN, go to the dot at what was the north entrance to the complex. You will be able to look inside. On second thought, I'll attach a screenshot looking thru the MACV north gate. The screenshot shows photo images which you can hide when searching. The photo images can be clicked on to directly move to that location.
Let us know if you find something of interest to you. Please include a screenshot to illustrate your find....

The Street View URL I posted earlier appears to be at the intersection of Tran Hung Dao and De Tham. I've attached a screenshot showing a closer view of the street sign....

Here's a URL for the Street View image which appears when I click on the blue dot shown at the bottom left of the image. I've attached a screenshot which shows the location of the Pegman symbol. I've also attached a JPEG of the Saigon Facilities Map which lists the Plaza as Number 51, located on Tran Hung Dao Street: Click Here. 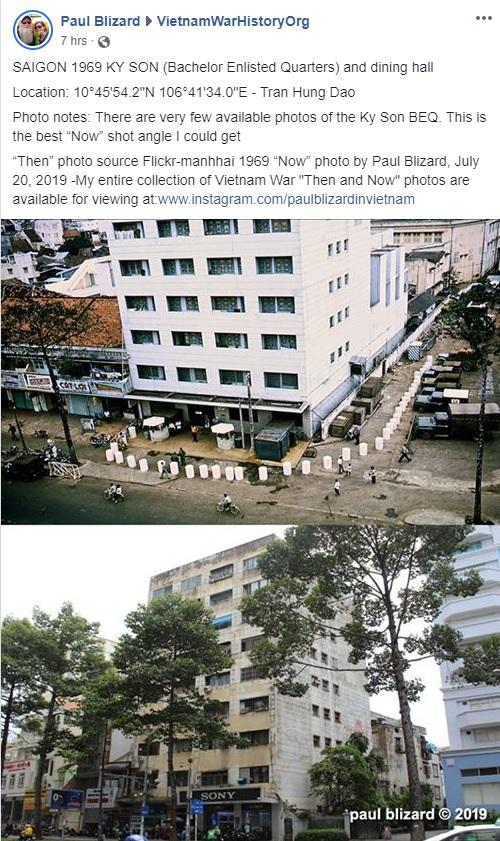 Hi Les, without looking at my notes, I’m thinking I was relocated from Plaza Hotel to the airbase about Jan. 10, 1970, or about 7 days after my censorship charges which happened on Jan. 3.  Soon after that I was sent to the Central Highlands at Kontum facing court martial charges.

And that bit of information is important, Dickie.  Knowing that it was a triage center helps explain why the crew there in April didn’t think my little scratches rated much more than a small patch here and there.  I’ll bet Jim will be jumping on this one like a chicken on a bug!
Ken