Charity Scams (Think before You Give)

Subject:  Restoring This WWII B-29 Bomber Has Taken 300K Hours So Far

This is an amazing airplane project.  Before I retired from Boeing 9 years ago I would check out the progress whenevver I was in Wichita.  Andy Labosky , who was one our Navs in the 11th ARS when I was at Altus, was one of the drivers in the effort.  I have a chunk of the airplane on my bookshelf in my den.  What a great success story.

Group Conversations
A to B

More on so-called “charitable contributions.”
Marketing giant Amazon.com claims to have joined the “charitable contribution” game with their application “smiles” which makes donations to various hand picked “charities” and causes, some of which don’t even pass the smell test.
If a product is ordered from Amazon on the “smile” website their actual contribution amounts to about ? of 1% of the purchase. A typical Amazon purchase of nearly $180 results in a charitable contribution of 88￠ or 0.005%. Not much of a meaningful contribution.
It would seem that Amazon is using its customers to burnish its own image as a generous corporate benefactor for public relations. If Amazon wants to make corporate contributions that’s fine, but to convince customers they are doing something meaningful is misleading.
When making a purchase from Amazon, it is necessary to be sure the order is placed on the Amazon website and that the website doesn’t have the word “smile” in it. I don’t know if the amount of the “charitable contribution” is added to prices shown on the Amazon “smile” website. I prefer to make meaningful donations to institutions of my own choosing, rather than be used to bolster the image of a corporation which hand picks its favorite causes for me while actually giving so little.
Steve

In addition to these listed below I suggest adding to the Fisher House Foundation which provides lodging to families who have members being treated at VA centers.  https://www.fisherhouse.org   Fisher House facilities save vets families a great deal of money and deserve support.  Check out their website.
Steve Sevits​

Steve, Believe the Wounded Warrior Project was also outed a few years back for using most of its donations for in house salaries and exorbitantly lavish parties in Vegas. Think they pledged to clean house and clean up their act. Not sure if that has happened or not.​ 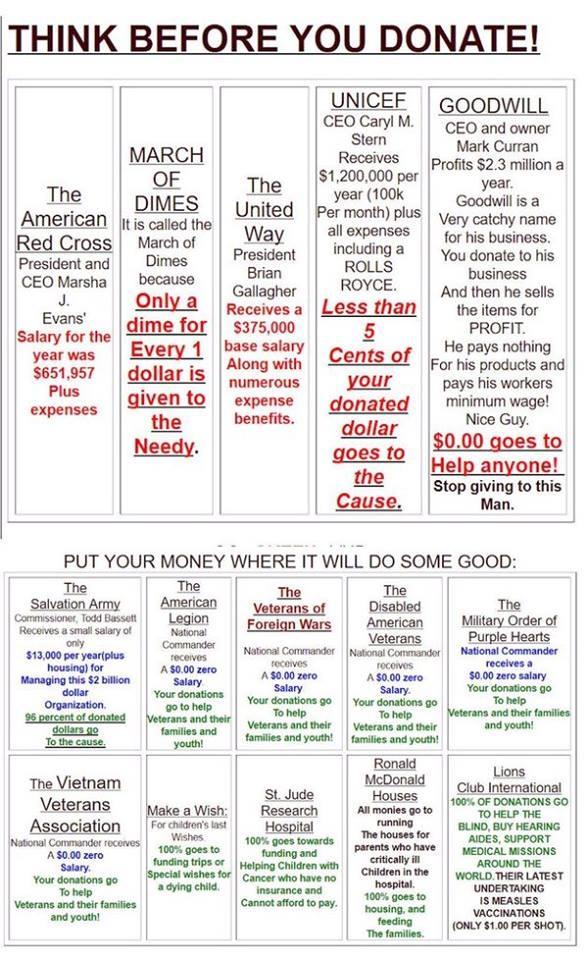 Got this from a friend.  Like anything you get on the internet, you should first check out the validity of their claims before you donate.