I grew up in Riverside. Many of my friends’ parents were stationed there, and as I got older my friends were stationed there. I got all my inoculations before I went to Vietnam at the base hospital.  I passed this article along to my high school Facebook group.  No one in Riverside is happy about this.  Even for those who weren’t Air Force, March was an integral part of our lives. There is so much history there.  It is sad to have it disappear.
Ann

I have no doubt, Frank. As I write in the foreword of the book I'm working on now on AFVN, it was Roger who is responsible for the years I spent working in radio. My late dad was friends with Roger's brother-in-law and over dinner one night, pop floated to Roger that his son was thinking about getting into radio. Roger invited me up to KMPC while he was on the air one Saturday morning and I was hooked. I recall him telling me that his entire career he'd only worked at three radio stations: a station in Maryland, KMPC and at AFRTS. Gene Price, whose remote broadcasts I produced when I worked at KLAC, was also a great influence and remains a friend.

Sad to say, Jim, that's not a "reason" to keep it open.  As was the unfortunate case of Presidio of SF, one of the most beautiful military posts/bases and where I finished my active duty, it was honestly no longer needed as a military installation.  Time to go.  Preston

There is also a "historical reason" for keeping the American Forces Network Broadcast Center at March Field (ARB).  In 1941, it was the first place that Bob Hope visited to give a show to the troops.  Everyone there was so appreciative of his efforts to "entertain the troops" he started a tradition of doing so at overseas bases and on ships around Christmas for the next 60+ years.

I can’t speak for the others but RC was not hurt by no more AFRTS gig. He owned radio stations of his own, including in Oregon. Maybe he learned some of his investment strategies from his boss at KMPC, Mr. Autry..
Frank

It was moved to its present location from Hollywood, where it resided on McCadden Place.
Ken

More than 200 satellite programming and other military media jobs at March Air Reserve Base could be relocated or eliminated if the Pentagon follows through on a proposal to consolidate those services at Fort Meade, Maryland.  The Department of Defense “appears to be serious” about the potential move, said Lana Abbasi, press secretary for Rep. Mark Takano, D-Riverside, whose district includes March.  While Takano initially was told that employees at March would have the option to move to Maryland, Abassi wrote, via email, that the Department of Defense “has already been issuing notices to employees that their positions are no longer being funded or funded through different accounts.  “The congressman suspects that those positions would be eliminated entirely after a certain period, though exact details are limited …”

A study to be conducted at March over the summer will determine how much space is needed for the Defense Media Activity services and compare that with what’s being used now, Takano’s office reported.  “Ultimately the study will (determine) the most economical use of facilities and the feasibility of consolidating functions at fewer locations,” read a fact sheet from Takano’s office, which added the study will wrap up in December.  Based on initial talks, “it seems that (the Pentagon) has already made a decision to consolidate options at Fort Meade … and is now determining how best to do it,” Abbasi said. A timetable for moving is unclear, although it could take up to five years “as existing contracts are allowed to expire,” she added.

Takano said this week that he’ll “actively oppose” any plans to move jobs away from March.  “Relocating DMA functions from March ARB will result in the loss of hundreds of jobs for hardworking people in my district,” Takano said in a news release. “It is an effort that lacks justification through hard facts, and I will continue fighting until (the Pentagon) clearly explains its position to move forward.” Rep. Mark Takano, D-Riverside. (File photo)  He criticized the Pentagon for being “slow to deliver concrete answers” about the relocation, adding “this lack of transparency is unfair to my constituency and my community.”  Pentagon officials did not respond to a request for comment.

Visible off Interstate 215 between Riverside, Moreno Valley, and Perris, March pumps $579 million a year into the Inland economy and employs more than 2,400 civilians, according to a 2016 study from the Rose Institute of State and Local Government at Claremont McKenna College.  One of the nation’s oldest military airfields -- it started as a World War I training airstrip -- March Air Force Base became an air reserve base following the 1993 Base Realignment and Closure process.
Defense Media Activity is a multimedia agency within the defense department. At March, the agency receives defense department images to be preserved and eventually transferred to the National Archives.  The agency also transmits radio and TV entertainment from the Armed Forces Network via satellite from March for troops around the globe. And a technical team based at March helps design audio-visual infrastructure for other agencies within the defense department.  In all, the agency employs 158 civilians and 109 contractors at March and 37 military personnel at March are assigned to the agency, resulting in a combined $32 million a year in spending, according to Takano’s office.  “Close proximity to Los Angeles and the city’s satellites only enhances (Armed Forces Network’s) proficiency and effectiveness to serve our military,” Abbasi said. “March ARB is an ideal location for DMA and a potential move would be disastrous for both employees and the service members they so dutifully serve.”
The American Forces Network Broadcast Center has been at March since 1995 and “we are mostly veterans,” said Todd Shorack, a broadcaster at March and a union leader with American Federation of Government Employees Local 3854.  “The plan to cut and move us resembles Wyle E. Coyote chasing the Roadrunner,” he said. “He’s off the cliff, but gravity hasn’t kicked in yet … We’re hoping that bipartisan political gravity will help us sink the idea. Which elected official wants to lose 250 good jobs from their area?”

Preston, Agreed that my "reason" was not a real reason.  I even preceded it with "historical."  The only "real reasons are how many shekels are stuffed into the politicians' pockets."  My real concern is that if we ever have to do another World War II style build-up, where are we going to get or put the bases?  Or for that matter, the troops.  A draft law will be passed only if it explicitly says "Anyone whose parents are worth more than $1,000,000 (or perhaps $100,000,000?) will be exempt!"  I agree that the Presidio of SF was a beautiful installation plus had a very fine military hospital and other important facilities.

I believe it was Bill Stewart who said AFRTS LA was located “High above where [it was] on you know what.” Loved it. This was to not promote 1016 North McCadden Place which would attract anti-Vietnam war protestors.  A Sun Valley site was after my time.
Frank

Transports on the Ramp at March AFB, Date Unknown.

The Department of Defense is considering relocation Defense Media Activity (DMA) functions done at March Air Reserve Base, a move that could affect more than 200 civilian and contracting jobs (File photo by Stan Lim, The Press-Enterprise/SCNG). 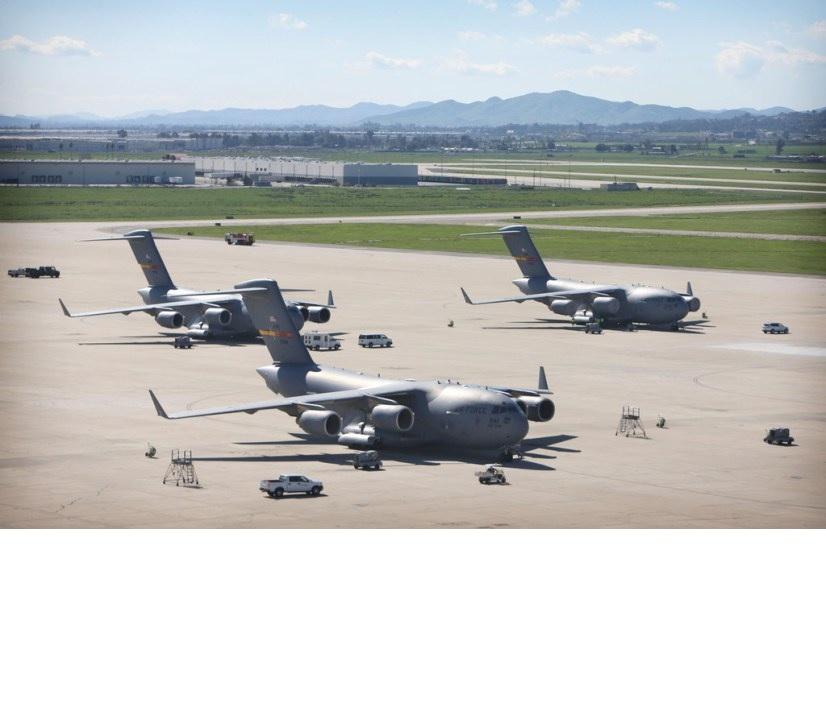 Ken,
Sorry to sound like a smart ass, but my understanding is that after AFRTS was in Hollywood, it was moved to Sun Valley, CA up the freeway from Burbank before it was relocated to March ARB.
Marc

Rhranks, Marc, SLP    [Most likely a type--but could it perhaps be a new dialect?]

Without getting into the politics of this article, just want to say that several years ago I wrote a piece on the AFRTS facility, then recently relocated from the HQ at Sun Valley, CA for the AMVETS quarterly magazine. The facility at March, the studios, the necessarily freezing archives building next door, were phenomenal. I also had the honor including the CO of the Sun Valley facility, Col. Rick Fuller, in my latest book based on his experience as a USAF combat cameraman in Vietnam. 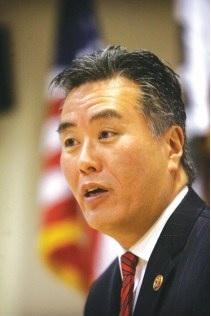 All my books are available through Amazon, but, assuming you want them signed, let me figure out a price beats what you'd have to pay Amazon and email you offline.

This reminds me that I need to purchase your books.  What is the price for all 3 and where do I send the check?