From:  Ken Kalish
Dated:  September 24, 2018
Subject:   Navy dissolves combat camera units - details follow
They are “supernumeraries” on a ship or aircraft – they take a seat or bunk away from a “real” sailor, and they have to be fed and supported.  If there are enough of them they become a tenant command, “sea lice” with which the CO would rather not have to deal.  I wonder … have they never seen the historical and morale value of Victory at Sea?  Where do they think the combat footage of our people originated, Hollywood?
Ken Kalish

Military journalism suffers as the result.

[NB: Bob's message had a link to a video but one would have to install a browser extension in order to view it.

Therefore only a photograph and the text portion of the link is repeated below.] 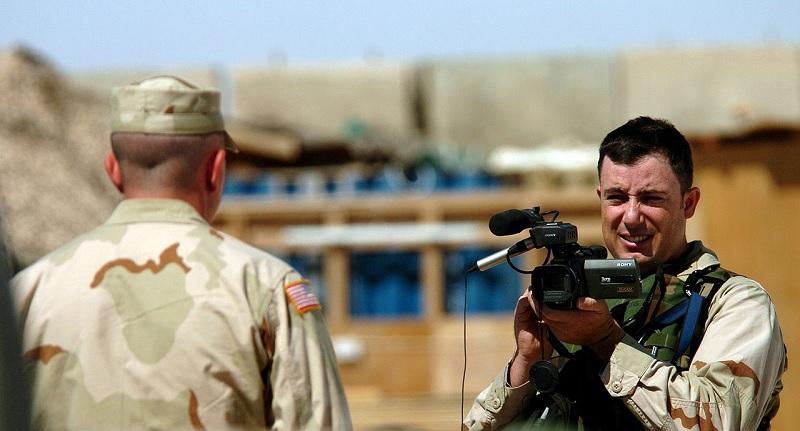 A ​photo taken by Johnny Bivera as a young third class petty officer during his first tour in Navy Expeditionary Combat Camera in 1992 may have prevented an international incident.
Bivera had been assigned to photograph a live-fire beach landing exercise between U.S. Marines and their South American counterparts. After it was over, children and spectators ran out to a berm to grab shell casings as souvenirs. Then there was explosion that injured at least two children and killing one, Bivera said.
The U.S. was being blamed . Bivera was ordered to document the scene. When he was done shooting, he developed his film in a darkroom set up in tiny bathroom on the destroyer USS O’Bannon. As the sun rose, he laid out his prints before an admiral.
“My pictures clearly showed that there were numerous dead mortar rounds stuck in the ground,” Bivera said. “Imagery also showed our Marines were only using (Light Anti-tank Weapon) rockets while they were lobbing mortar shells. So the importance of visual imagery at that moment became clear to me.”
Bivera declined to name who has at fault for those mortars. He retired as a chief petty officer in 2006. Bivera shared his story before a small crowd of former and current Navy combat photographers and videographers. They gathered at Naval Station Norfolk Friday for a ceremony to mark the end of Combat Camera. The Navy announced late last year that it would disband the Norfolk-based command, as well as a similar one in San Diego, by Oct. 1 to save money. ADVERTISEMENT
The Navy started putting photographers in aircraft during World War I for aerial reconnaissance missions. Its combat photographers have documented every major conflict since, as well as training exercises and other missions, not just for public use but to document the work of its sailors. It was a tight-knit group with specialized training that allowed them to embed across military units, including with Navy SEALs, as well as dive on underwater wreckage and shoot aerial missions.
Sailors who served in Combat Camera commands have been reassigned across the fleet. Those working as mass communications specialists who need specialized training for the kind of assignments combat camera used to do will receive it as needed, Capt. Gregory Hicks, the service’s chief of naval information, said.
Petty Officer Second Class Sean Furey shot the command’s final assignment, a mission in July to document wreckage of the USS San Diego, which sank off the coast of New York in 1918. The Navy still has not determined if its sinking was the result of a German mine or submarine-launched torpedo.

is a weird experience going down knowing that there’s still people in this ship and we’re here so many years later, still, as sailors going down and checking it out,” he said.
While that mission may stick with him, Furey’s favorite shot – as with many photographers – happened by accident.
Three explosive ordnance technicians are surfacing from a dive during a training exercise in the Gulf of Aqaba, off the coast of Jordan. The divers are overshadowed by a massive jellyfish lit up like a purple orb in the foreground. The jellyfish had been around all day, but when it moved in front of Furey’s camera, he jumped, firing the shutter.
“At the time, we didn’t know that they didn’t sting you,” Furey said. “So we were we’re trying to avoid all these jellyfish.”

With the U.S. still engaged in conflicts in Iraq, Afghanistan and against the Islamic State, some at Friday’s event wondered about the long-term effects of dissolving Combat Camera.
Skip Nocciolo retired as a chief petty officer in 1998 after spending two tours with Combat Camera and later went to work for CNN. Much of the archival footage that documents the U.S. military in action during previous conflicts exists because of the work of Navy combat camera operators, he said.
“Twenty years from now will there still be plenty of archival footage that can be drawn upon for documentarians and filmmakers to utilize to tell the story of the military?” Nocella asked.

Group Conversations
A & B
View on Mobile