NEVER SENT AS A MESSAGE

While working on this page, I was reminded of a conversation I had with my cousin, Jack, a few years ago.  Jack's father, Kenny, (as was Jack later on) was a wheat farmer in Western Kansas and qualified as my only "rich relative."  I remember Kenny bought a new car every year, etc.   He was also a flying farmer.   During the late 1940's through ?? he had his own single-engine plane and sometimes he and his wife and maybe the kids would fly to Kansas City (300+ miles?) to go shopping, etc.

Years after Kenny had passed away, Jack and I were talking and I asked him "Why didn't you take up flying like your Dad had?"  This is my memory of the ensuing conversation:

Jack:  "Well, I enjoyed flying and sometimes found it useful in checking out the wheat from the air.  [As I recall, at one time,

Jack had at least four sections under cultivation and possibly rented more land from others.]

Jack:  "Because one day I got a call from the FAA telling me that I would have to turn in my license and quit flying."

Jack:  "The guy who called me continued by telling me that my instructor had never been certified as an instructor.

Therefore all my lessons, etc., weren't valid.  I didn't think it was worth the hassle to 'go back to school.'" 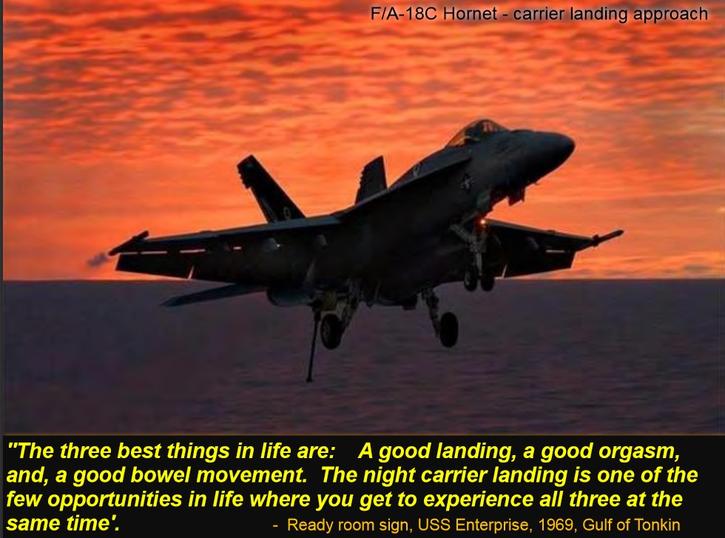 Jim,
Oh, yes! I’ve experienced it myself, as a passenger and standing on the LSO platform just to the right of that aircraft. It’s the biggest rush you get outside of the best sex you’ve ever had.   Having a Tomcat coming at you out of the dark is one of the most exciting, heart-stopping experiences I’ve ever experienced.  You have only a split second to decide to get out of the way (dive into the big canvas net under the platform) or watch as he catches the wire and goes full power straining against the hook and cable until he gets the cut power signal.  Especially when you know it’s a “nugget” pilot doing his first night qualifications in a fleet aircraft. “We’re not in Kansas anymore, Dorothy!” Find the PBS video “Carrier” produced from a NIMITZ deployment where the squadron commander took the tanker up to refuel a pilot who was having trouble catching the wire in heavy seas. They both made it, but it was a nail biter all the way.  I see these guys on the MIDWAY, even after a second career flying for the airlines, now riding a desk or fully retired, growing fat and bald, knowing they had the most thrilling and fun job in the military.
Joe C

That is correct.  FRS CQ (qualifying the “Nuggets”) is done off the coast so if they can’t cut it, they “Bingo” to a nearby airfield (NAS North Island or MCAS Miramar).  When on deployment they have no place to go but the ship. Thus, the tanking until they make it down.
Joe C

Thanks for the explanations, Steve and Joe.  I too a pilot--well, not really but I have gotten as far as one solo cross-country.  I was so scared the whole time without an instructor that I gave it up.  I'd have continued if I could have taken an instructor with me all the time, but that was too expensive!
I like to dabble in various things, so that was my dabble in flying.
Nancy

I think what Joe is saying, Nancy, is that if they don't get a signal to cut engines they would just pull the carrier around.  Smile!

"Tanking" is a luxury only military pilots have, taking on more fuel from another aircraft --- so they don't run out of fuel before being able to land.  As a civil pilot (commercial pilot for 44 years and instructor) taking on more fuel is a luxury denied to us.
Although I've walked the deck of the Intrepid in NY, I've never been aboard an operational carrier much less experienced a carrier landing.
Recalling my flight training (civil, not military) I can attest to the thrill/apprehension of a pilot's first night landing.  The airfield is a static target, not moving but sometimes there are cross winds.  Frequently we have no Air Traffic Control and certainly no Landing Signal Officer, we have to make all the judgments by ourselves.  As an instructor I understand how difficult it is to teach the art of judgment.
In my view carrier pilots are demi-Gods, I still find it difficult to come to grips that mere mortals can be taught to put an aircraft down on the deck of a moving ship.  They have my greatest admiration.
Even a civil pilot experiences a complex and wide ranging array of emotions and feelings the first time he or she lands an aircraft without an instructor, at night.  Carrier operations must intensify those feelings a thousand fold.  Come to think of it, I probably hold my breath during the last 20 or 30 seconds of every landing.
I suggest taking flying lessons for anyone who wishes to experience the ultimate sensation of learning just how great an experience it is to rely on yourself.  To us mere mortals, training to become a pilot is learning experience of how good you can be while  discovering the limits and boundaries of what you can be taught.  Piloting is a learned experience, most of it can be reduced to a set of routine experiences and with repetition, the library of judgment accumulates, turning you into a skilled aviator.
Steve Sevits

So can I take it from what you said, Joe, that even after they think they've caught the wire, they don't cut the engine until given a signal so they can go around again if necessary?  Whew!!
Nancy