Yahoo Celebrity News   (This link has a number of sub-links to Robin Williams.)

[This was the first AFVN@Yahoogroups message sent out notifying everyone of the tragedy.] 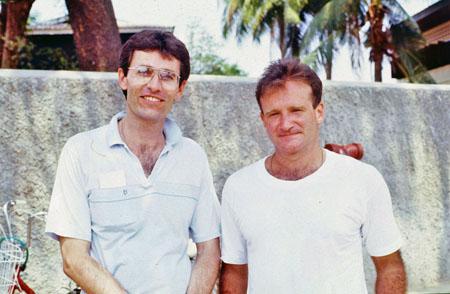 KDKA streams audio which is all that's needed.  I'll make a note to capture it and convert it to a .WMA which shouldn't be any problem to put up as an audio attachment file.  Right now at 10:10 PM KDKA is taking about Robin Williams.  I'll grab it and see what it is.

Robin Williams -- Comedian and Actor(Page 1)
August 2014
Robin Williams stared in the movie "Good Morning, Vietnam" which was loosely based
upon Adrian Cronouer's (SSgt, USAF) tour with AFVN in 1965 and 1966.
"Dawnbuster," the early morning radio program, started in 1962, not long after the station was opened.
The first DJ was Bryant J. "Buck" Arbuckle, CPO, USN.  It continued through the years and there is some
doubt as to who started greeting the audience with "Good Morning, Vietnam" but it is generally agreed
that Adrian Cronauer was the first to use the long "Gooooooooooood Mooorning, Vietnam."   Others
continued copying Adrian until the program was finally closed with the closing down of AFVN in 1973.
Robin Williams rendition in the movie, although not identical to Adrian's, plus the fact that the movie
became a huge hit certainly brought the American Forces Vietnam Network into the general public's eye.

Hollywood--Oscar-winning actor and comedian Robin Williams, who dazzled in such wide-ranging dramatic and comedic roles as alien, nanny, therapist and cartoon genie during a four-decades long career, was found dead in his northern California home in a suspected suicide Monday. He was 63.  The Marin County Sheriff's Department said in a statement that Williams was found unconscious and not breathing in his home around noon. The statement said the investigation into Williams' death is ongoing, but the coroner "suspects the death to be a suicide due to asphyxia."  The Marin County coroner's office said Williams was last seen alive at home at about 10 p.m. Sunday. An emergency call from his house in Tiburon was placed to the Sheriff's Department shortly before noon Monday.  A representative for Williams said in a statement the actor had been battling "severe depression of late."  "This is a tragic and sudden loss," Mara Buxbaum said. "The family respectfully asks for their privacy as they grieve during this very difficult time.”  Williams' wife Susan Schneider said in a statement she is devastated and asked for privacy. Williams publicly struggled with addiction during his career and most recently went to rehab in June to “fine tune” his sobriety, his rep said at the time.  The rehab stint would have gone unnoticed, except that the comedian opted to pose with a fan for a photo at a Dairy Queen near the facility, and the picture eventually went viral.   Williams had spoken openly about his cocaine addiction, which plagued him during the '70s and '80s. Later, in 2006, he said he was an alcoholic and went to rehab to get his drinking under control. He had rebounded well enough to joke about his stint during his recent tour. "I went to rehab in wine country," he said, "to keep my options open."

One of my neatest assignments in journalism was to spend a day on the set with Williams.  Here he is (left side) filming Good Morning Vietnam, in Nakorn Pathom, outside Bangkok, where they recreated a Saigon street scene, complete with Renault taxi cabs made out of fiberglass.  The photo on the right is of me with Robin.

One of my neatest assignments in journalism was to spend a day on the set with Williams.  Here he is (left side) filming Good Morning Vietnam, in Nakorn Pathom, outside Bangkok, where they recreated a Saigon street scene, complete with Renault taxi cabs made out of fiberglass.  The photo on the right is of me with Robin. 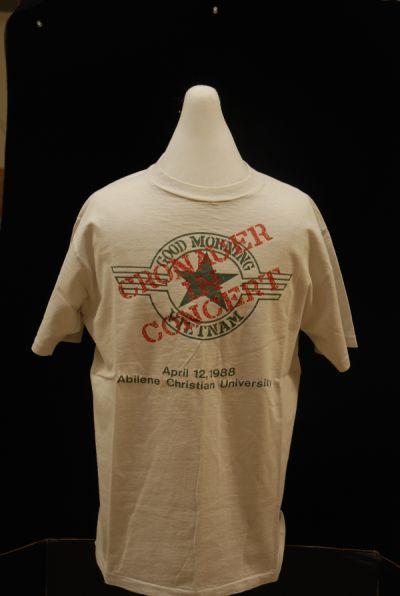 Most AFVNers probably know that Adrian Cronauer donated materials to the Texas Tech Vietnam Archive, but this may be news to some of the CICVers and MACVers.

One of the items is a Public Service Announcement by Mr.Cronauer where he mentions having been portrayed by Mr.Williams.  I've attached the PDF version.

There's also a photo attached of a shirt from a college presentation Mr.Cronauer made.  The caption mentions Robin Williams.

"T-shirt - Cronauer in Concert, April 12, 1988, Abilene Christian University.  When Cronauer spoke at ACU, he thought they were scared by Robin Williams' portrayal because his contract specified that his honorarium amount would be cut in half each time he uttered at curse, obscenity, or swear word."

Would there be some way of sending that talk to the list afterwards?

He was 63.  The apparent cause of death was suicide, authorities said.

There is a free program called Audacity that is relatively easy to use and permits cutting audio files into sections.  It is available at http://audacity.sourceforge.net/   Steve  Zeigler's suggestion to use GigaSize has its merits but everyone would have to register, etc.  Do you have DropBox?  (Also free at https://www.dropbox.com/referrals/NTMyNjQ1OTcyNDk?src=global9).  Perhaps it is much like GigaSize in that one can upload and download from it--but it is something I already have.  If you find dividing the file using Audacity to be too "audacious," we might to use it so you could send the file to me and I could divide it up for everyone else.

Actually, I'd like to do that because if I can get KDKA's permission, I would also like to add it to AFVNVets.net.  Come to think it, getting permission might be a good idea before you even send it out to anyone??? 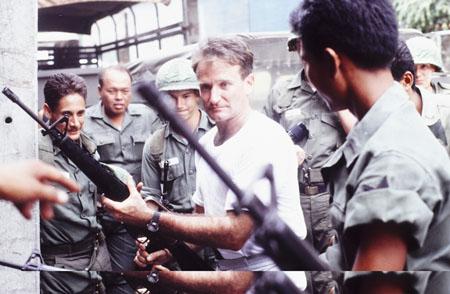 Monday night I checked KDKA for streaming and stumbled across a discussion about Robin Williams so recorded the discussion, appx 10:15 PM --> 11.   The only problem is that the file is 105 MB which is too large for my email program to transmit.

If anyone out there has the ability to make it available to AFVN list subscribers, I’ll gladly burn it to a disc and send it to you.  It’s in .WMA format but I can put it in MP3 if preferred.

Tuesday afternoon’s KDKA interview, I suspect will also be too large for me to send and I can put that on a CD and send that as well to anyone who can find a way to make it available to all.

The best I can do is capture the programming -- distribution has to be someone else's responsibility.  Anyone who will send me a postal address, I’ll send the CDs.  Technology beyond pasting a stamp on an envelope is too complex for me.

Due to postage costs, sorry I can’t send everyone CDs @ over $2 a head.

Mon nite's KDKA discussion about Robin Williams (10:15 -afvn11 PM) proved to be too big a file for me to transmit as .WMA attachment.  I'm limited to attachment files of 20MB or less.

Subject:  Did My Brother Hear Wrong?

I was more interested in hearing what Adrian had to say.  There's lots of coverage on the channels now about it.

Send large files using  >  http://www.gigasize.com/index.php  <  GigaSize.com allows you to upload large files in just one click.  If you have files that are too large to email, use GigaSize to share them with your friends in a quick and easy way.

I'll try to make it happen.

Cast member Robin Williams speaks during the television series "The Crazy Ones" in Beverly Hills, California, in this July 2013 photo. REUTERS

Robin Williams, the versatile actor whose madcap comic style made him one of television and film’s biggest stars, was found dead on Monday from an apparent suicide at his home in Northern California. He was 63.

The Marin County Sheriff’s coroner’s division said it suspected Williams committed suicide by asphyxia, but the cause of death is still under investigation and an autopsy will be conducted Tuesday.

“This morning, I lost my husband and my best friend, while the world lost one of its most beloved artists and beautiful human beings. I am utterly heartbroken,” Williams’ wife Susan Schneider said in a statement.

Williams, who won an Academy Award for his supporting role as a fatherly therapist in the 1997 drama “Good Will Hunting,” had been suffering from severe depression recently, his publicist Mara Buxbaum said.

Williams had struggled with addiction in the past and had entered a Minnesota rehabilitation center this summer to help him maintain sobriety.

His representatives at the time said Williams was not using drugs or alcohol but had gone to the center to “fine-tune and focus” his sobriety after working a longer-than-usual schedule.

The death of Williams, who had introduced his frenetic and physical style as the quirky alien in the late 1970s TV comedy “Mork & Mindy”, shook Hollywood, and fellow actors mourned the loss of what many called a big-hearted man and one of the most inventive comedians of his time.

The Marin County Sheriff’s office said it received an emergency call about noon local time on Monday, saying that Williams was unconscious and not breathing at his home near Tiburon, north of San Francisco.

Williams is scheduled to appear in “Night at the Museum: Secret of the Tomb” on Dec 19, 2014, playing the statue of Teddy Roosevelt who comes to life at night. Twentieth Century Fox, which will distribute the film, had no immediate comment.

In April, the Hollywood Reporter said that Fox’s Fox 2000 division was developing a sequel to his 1993 hit “Mrs Doubtfire” that would reunite Williams and director Chris Columbus.

In the film, Williams played one of his most enduring roles as a struggling actor and divorced father who assumes the identity of a British nanny to be closer to his children.

The actor was most recently in the CBS television comedy “The Crazy Ones,” which was canceled in May after one season.

Williams, who was born in Chicago in 1951 and grew up in suburban Detroit, was as skilled at comedic riffing as he was as a dramatic actor, earning four Academy Award nominations, the first for his portrayal of U.S. Army deejay Adrian Cronauer during the Vietnam War in “Good Morning, Vietnam.”

He also earned nominations for the 1990 coming-of-age prep school drama “Dead Poets Society” and “The Fisher King” in 1991 in which he plays a homeless man who helps save a suicidal radio host.

Williams’ final tweet was posted on July 31. He wished his daughter Zelda a happy 25th birthday.

“Robin was a lightning storm of comic genius and our laughter was the thunder that sustained him,” said Spielberg in a statement cited by Variety.

“He was a pal and I can’t believe he’s gone,” added Spielberg, who famously phoned Williams to cheer himself up during filming of his harrowing 1994 Holocaust drama “Schindler’s List.”

Spielberg’s tribute was echoed throughout the entertainment industry.

“I can’t believe the news about Robin Williams. He gave so much to so many people. I’m heartbroken,” comic and talk show host Ellen DeGeneres said on Twitter.

“You taught us how to stand on the edge, fearless, + shine,” Leto said on Twitter.