I recall seeing a deuce-and-a-half full of Thai troops show up on Truong Minh Ky Street, just outside the Tan Son Nhut Main Gate. It was the day AFTER an MPC Change Day.
The Thai troops went to all the businesses in the area and offered a dollar of new MPC for ten dollars of old MPC. They got a lot of business from the Vietnamese who had missed the boat the day before.
The Thais explained that their commander certified that they had been at a remote location on Change Day, and they were given another 24 hours to change old money.
Mike McNally

Oh yeah?
Thai troops were housed in the multinational forces corps compound in Cholon.  The Thais provided a hospital and agricultural services in the Delta.  Like everyone else in the Delta who didn’t wear light tan or black and red, the Thais took up arms to defend themselves and those who sought shelter with them.  They were more active than the Philippine forces who were supposedly there only to provide transport services and agricultural support.  Those guys had the balls to go unarmed through known ambush areas with nothing between them and the next round but a windshield, even when they carried military cargo.
Ken Kalish

This "Group Conversation is actually almost too short to be called a conversation.  However, it does correct  a rather common misconception.  It should be noted that Thailand also participated as a member of the United Nations Command during the Korean Conflict and, even today, has a "United Nations Liaison Officer" on its  Embassy staff in Tokyo.    [Webmaster]

​The following map and question/answer appeared on Facebook in July 2017.

Which country in Southeast Asia was NOT directly involved in the Vietnam War?

The "correct" response was "Thailand."

Thailand and the Vietnam War

I had a female Thai officer as a roommate when I was billeted at the Meyerkord BOQ in Saigon, September and October 1969.  I barely saw her, but her uniforms were there.
Ann

Why Thailand Takes Pride in the Vietnam War

[This was not in a message but I think I picked it up from FaceBook.   Webmaster] 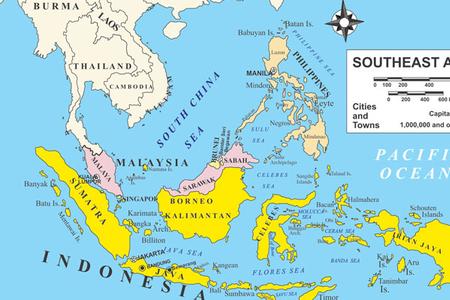