At that time, he wrote "I bought an 8mm Yashica movie camera during a stand down from combat. Took movies during the stand down and then decided to hump the camera into the bush on our next mission. I took footage during our airmobile assault. After blocking out Vietnam for 36 years I decided to use my footage to pay tribute to those soldiers that were ambushed and killed on Easter Sunday 4-11-1971. I never expected that video to be seen 1.5 million times and the rest of my videos to be seen 1 million times for a total of 2.5+ million currently. In this version, I decided to add personal narration."

Launching with a robust and diverse slate of content, VetFlicks will be building solid and valuable relationships

Note:  This comes close to being an advertisement, something I try to avoid but since it appears to be

non-profit and is directed towards veterans, i think that it is worth posting.   Jim White, Webmaster

[Received from Michael Goucher in June 2017.]

A couple of links and other information related to the 40th Anniversary of the Fall of Saigon.

Fifty years after Vietnam, an original collection of stories has been released to honor and remember the service, duty,

and sacrifice of Vietnam era veterans. Representing all states and services, this Vietnam 50th Commemorative Gift

in 2018. We invite you to learn more about this unprecedented commemorative gift and the states and private community partners who are making it possible.

[Submitted by Mike McNally in February 2017.]

I bought an 8mm Yashica movie camera during a stand down from combat. Took movies during the stand down and then decided to hump the camera into the bush on our next mission. I took footage during our airmobile assault. After blocking out Vietnam for 36 years I decided to use my footage to pay tribute to those soldiers that were ambushed and killed on Easter Sunday 4-11-1971. I never expected that video to be seen 1.5 million times and the rest of my videos to be seen 1 million times for a total of 2.5+ million currently. In this version, I decided to add personal narration.

Vietnam - Links to a Variety of Websites on Vietnam

This goes to a variety of websites on the Vietnam War.

Vietnam Radio and Television Stations as of 2013

A list of current radio and TV stations in Vietnam.  Some of them are where some of us

have been and others are undoubtedly at locations familiar to someone.

This WBGH (Boston) link shows the November 1, 1964 anniversary celebration of the overthrow of the Diem regime.

the last president of South Vietnam, are shown on the reviewing stand.

(Unfortunately, there is no sound to accompany the video.)

An article by Mike Todd Published in the Montreal Gazette in March 2018.

This letter appeared in The Montreal Gazette on Sept. 19, 2017, in answer to the above article

In 1970, my mother was the secretary for the volunteer department of the Royal Victoria Hospital in Montreal.
One day, a young man walked in and said that he wanted to volunteer at the hospital.  He said he could not legally work in Canada because he was an American citizen.  He was against the war in Vietnam and he had come to Canada to escape the draft.
My mother listened, then informed the man that her son--born and raised in Canada--was currently serving as a soldier in the U.S. army in Vietnam, and was taking his place.  In her words, "he slithered out of my office."
We seldom hear of Canadians who went the other way -- those who crossed the border, joined the U.S. military and served during the Vietnam War.  A 10-year-old directory of the Vietnam Helicopter Pilots Association shows 13 Canadian pilots who served in Vietnam and were still alive. I am one of them.  The Canadian Vietnam Veterans Association estimates that 12,000 Canadians served in combat roles in Vietnam. Some who died have their names on "The Wall"--he Vietnam Veterans Memorial in Washington, D.C.
---David Mills, ex-U.S. Army Chief Warrant 2, St-Joseph-du-Lac
[Link received from David Pinto]

Vietnamese Ships (Both Military and Civilian) Following a US Naval Vessel

as they Escape from South Vietnam and Head for the Philippines

Taken right at the end of the Vietnam War in March/April 1975.

Vietnam - The Quiet Mutiny  [1970]
This is a 1970 Documentary by John Pilger about disillusioned American troops in open rebellion against the war.

Vietnam: The Real War - in Pictures

A series of 13, 50-minute or so YouTube programs on the Vietnam War by Ferenc Csaszar

Vietnam: The War That Killed Trust

​What did the Vietnam War do to s as Americans?

There were some great lessons that we failed to act upon.  But it's not too late to remember.

A short discussion about Vietnam today and how much it has changed or not changed over the years.

Vietnam Under the French Prior to World War Two

Also some information on Cambodia and Laos.

Don't worry if your French is rusty.  Attached is a link to a French site which you can enjoy just by clicking on everything

that is clickable.  When you get to the end of a particular page, just return to the Sommaire page and go to the next item.

Near the bottom of the Sommaire page, is a recording of Josephine Baker singing "La Petite Tonkinoise."

There is also a short video showing the French in Indochina.

chartered and exclusively dedicated to Vietnam-era veterans and their families.

[Received from Steve Sevits in January 2016.]

Vietnam Wall Memorial - 22 Things You Should Know About the

[Received from John Kafka in August 2016]

This goes to a number of unique photos of the Vietnam Wall and other wall memorials in the D.C. area

[Received from Paul Kasper in November 2016]

How did he end up dead in a landfill?

Jack Wheeler co-founded the organization that built the Vietnam Veterans Memorial, known as the Wall.

His body was found in a landfill in Delaware in 2010.

​"Vietnam War" Episode 1: What They Got Wrong (Burns/Novick/PBS)

Twelve PDF files covering the Vietnam War by month.   Select the month and then scroll down to find the day.

The files are rather large so they may take a moment to load.

(The) Vietnam War Divided the Country,

But Music United The Troops

turned to music to cope.

You will get their postings and, if not already signed up, a chance to do so.)

After joining, posts made by other members will show up as you browse Facebook.

Vietnam War - Ken Burns Never Knew How Wrong He Was

[Received from Rick Fredericksen on September 5, 2017.]

Watches of the Vietnam War (Iconic) 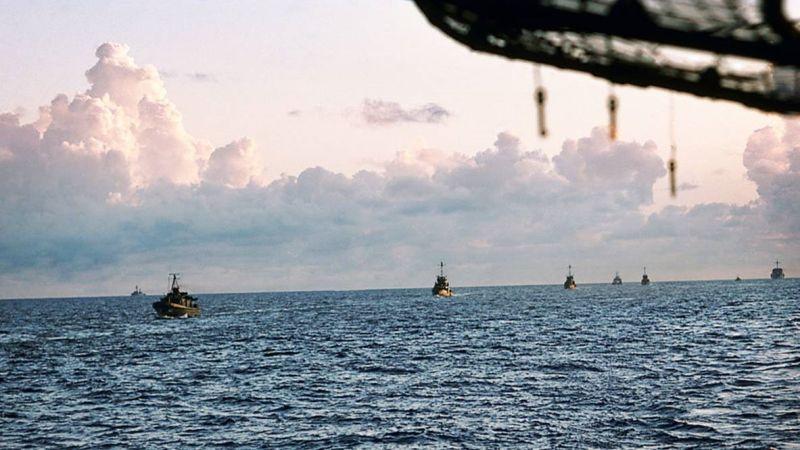